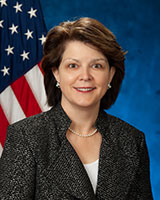 Responsible for VHA human subjects research policy, education, and support to the VA central institutional review board (IRB).  Prior to this, as an active duty Army Colonel with 30 years of service, she oversaw all human research policy and education for the United States Army through the office of the Army Surgeon General.  She has 10 years of expanding responsibilities over research and human subjects protection policy. She is a leader in effective, efficient, and compliant policy and education in human subjects research. Dr. Klote was awarded the Legion of Merit, the Defense Meritorious Service Medal, the Parachutist Badge, and the Expert Field Medical Badge.

Dr. Klote began her Army service through ROTC at James Madison University majoring in computer information systems and earned a regular Army commission in the Military Intelligence Corps upon graduation.  She served as a Military Intelligence officer for five years with tours in Korea, Honduras, Fort Meade, MD, and as Detachment Commander, Rosman Research Station, NC.  She was then accepted to the Uniformed Service University of the Health Sciences where she graduated with the Esprit de Corps award.  She trained in Internal Medicine and Allergy Immunology at Walter Reed Army Medical Center.  She holds a board certification in Allergy Immunology. She holds the Army’s A designator for professional achievement, is a member of the Order of Military Medical Merit, and was awarded the Military Health System Leadership Award for junior officers.  As a physician, Dr. Klote has worked at the Office of the Army Surgeon General, The Walter Reed National Military Medical Center, the US Army Medical Research and Materiel Command, and the Walter Reed Army Medical Center.  She served one tour in Iraq in 2008.  She has earned the Certificate for IRB Professionals (CIP).