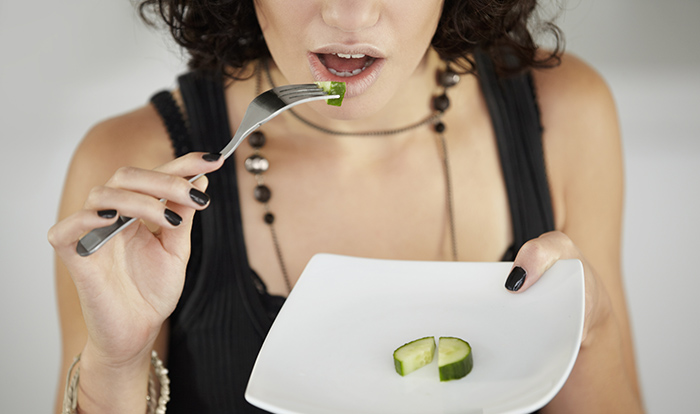 Anorexia nervosa—obsessive desire for weight loss, marked by severely restricted eating—is one of the most common eating disorders. (Photo: ©iStock/PeopleImages)

"One study of more than 400 female VA patients found that military sexual trauma is an independent predictor of eating disorders, but that combat exposure isn't."

The issue of eating disorders has long been understudied in the VA community. But that trend is slowly changing, in part, due to the perception that high rates of PTSD, depression, and obesity could make Veterans—both men and women—susceptible to dangerous eating patterns.

An eating disorder is a condition such as anorexia, an obsessive desire to lose weight by refusing to eat; bulimia, when excess overeating is often followed by self-induced vomiting, purging, or fasting; and binge eating, which includes overeating without purging or other compensatory behaviors. These conditions can have serious consequences for mental and physical health and can sometimes lead to death.

One of the studies finds that women who reported cases of military sexual trauma were twice as likely to develop an eating disorder such as anorexia, bulimia, or binge eating—compared with women Veterans who did not report such trauma. The study, published in May 2017 in Psychological Trauma: Theory, Research, Practice, and Policy, concludes that military sexual trauma is an independent predictor of eating disorders, but that combat exposure isn't.

The researchers define military sexual trauma as sexual harassment (unwanted sexual attention like verbal remarks or touching, or pressure for sexual favors) or sexual assault (use of force, threat of force, or coercion used for sex against one's will). More than 40 percent of women who served in Iraq in Afghanistan have reported sexual harassment, and about 10 percent have reported sexual assault. 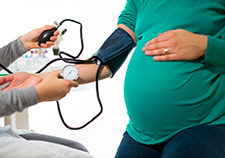 The researchers looked individually at the impact of five types of trauma—childhood physical abuse, childhood sexual abuse, adult physical assault, adult sexual assault, and military-related trauma—on eating disorders. (Traumatic experiences during adulthood could include events in both military and non-military scenarios.) The research team also analyzed a model that included all five types simultaneously, so the association between each trauma type and eating disorders controlled for the influences of the other types. The model was based on an understanding that women Veterans are likely to have experienced more than one traumatic incident in their lives.

The research included 186 female Vets with a history of trauma. They averaged 54 in age and almost all were white. Of the sample, 14.5 percent reported clinical levels of eating disorder symptoms; multiple traumatization was linked to a higher likelihood of such symptoms.

Military trauma could mean "seeing something horrible or being badly scared" during service in the armed forces, says lead author Dr. Kimberly Arditte Hall, a VA advanced research fellow in women's health with a focus on clinical psychology in the National Center for PTSD at the VA Boston Healthcare System. It's possible some women in the sample experienced a military trauma that could have led to a traumatic brain injury, but that could not be determined from the data, she says.

It's also possible that the military traumatic experiences described by the participants could have led to PTSD, but that condition was not studied in this paper, she notes.

"Eating disorder symptoms are common among female veterans, and trauma exposures are differentially associated with symptom severity," the authors write. "It is critical to assess for eating disorder symptoms in female Veterans, particularly those with a history of military-related trauma, to facilitate detection and appropriate treatment."

In addition to Arditte Hall, the research team included two other experts on women's mental health from the National Center for PTSD, Dr. Karen Mitchell and Dr. Katherine Iverson.

Dr. Jessica Breland, an investigator with the Center for Innovation to Implementation at the VA Palo Alto Health Care System in California, led research efforts on the study relating to military sexual trauma. She's authored studies on women Veterans resorting to unsafe eating habits after experiencing trauma, including one that says military trauma that is related to such conditions as depression and PTSD can trigger disordered eating. Disordered eating, a wide range of abnormal eating behaviors, doesn't meet the criteria for an eating disorder diagnosis.

Breland's latest study aimed to determine whether military sexual trauma and combat exposure were independent predictors of eating disorders among women Veterans. The participants were women ages 18 to 70 who had used VA medical center services and had no history of psychotic disorders or thoughts of committing suicide. Nearly half of the 407 Veterans who responded to a questionnaire were women of color.

The questionnaires included two questions often used in the military to determine if someone has experienced military sexual trauma. Respondents had to answer yes to just one of the questions to be considered a victim.

The participants also noted if they had ever experienced combat exposure in a war zone or if it was part of their job. Those who said yes to at least one of those scenarios met the criteria for combat exposure.

Two-thirds of the respondents reported military sexual trauma, about one-third reported combat exposure, and 15 percent met the criteria for an eating disorder. Based on a standard statistical test, the researchers found that women who reported military sexual trauma were twice as likely to have an eating disorder such as anorexia, bulimia, or binge eating, compared with those who didn't. The group that responded yes wasn't asked to elaborate on why sexual trauma can lead to unhealthy eating patterns.

But the research team, through the statistical test, did not find combat exposure to be an independent predictor of eating disorders. Combat exposure and military sexual trauma were separated in the study as potential causes of unhealthy eating patterns.

"It is less clear why combat exposure was not associated with eating disorders," the researchers write. "It is possible that women choose other ways to cope with combat-related trauma, or that military sexual trauma is associated with other disorders that are responsible for its association with eating disorders. Future research is needed to tease apart these and other issues. Given the changing roles of women in the military, continued work investigating the relationship between combat exposure and [eating disorders] will be important as women are likely to be exposed to more combat in the future."

For future studies, Breland says she's interested in learning how eating disorders relate to obesity, particularly because VA offers access to many empirically supported weight loss programs. She's following the research of Dr. Shira Maguen, a psychologist at the San Francisco VA Medical Center who is working to develop a nationwide VA screening program for eating disorders. No such program currently exists.

Maguen, the senior author on the study of military sexual trauma and its relation to eating disorders, hopes her program will improve the identification and treatment of dangerous eating patterns in both female and male Veterans.

"We hope to learn how to best implement this type of screen in a complex medical system, accounting for both patient needs and organizational factors at multiple levels," Maguen says. "We hope that this screen can help in detecting eating disorders, so we can provide Veterans with the care they need within the VA."