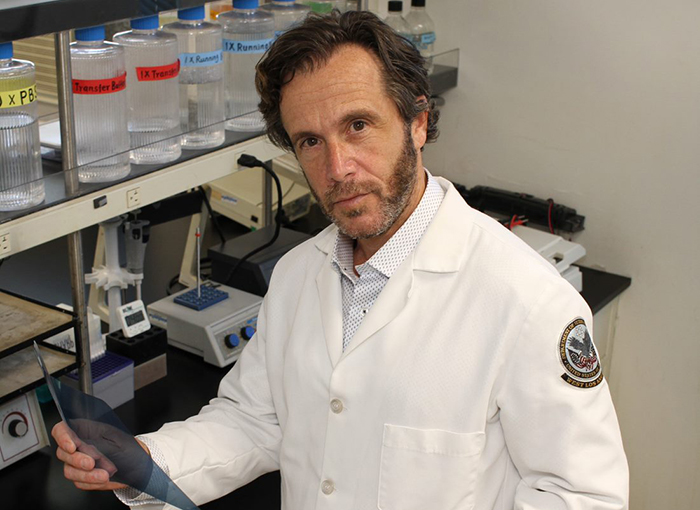 Dr. Matthew Rettig, chief of hematology and oncology at the VA Greater Los Angeles Health Care System and one of VA’s top prostate cancer researchers, is leading a clinical trial to investigate a prostate cancer drug as a potential treatment for male Veterans with COVID-19. (Photo by Scott Hathaway)

"This is something where the pressure to deliver in a timely fashion is very high because of the lethality of this disease and the potential for it to expand. "

Dr. Matthew Rettig is one of the leading VA researchers on prostate cancer.

The chief of hematology and oncology at the VA Greater Los Angeles Health Care System, he has played a major role in some 50 clinical trials, with a focus on studying potential drugs for   aggressive prostate cancer.

Until now, though, Rettig has never faced such urgency to generate evidence of how well a treatment works. He’s leading a clinical trial to investigate a prostate cancer drug as a potential treatment for male Veterans with COVID-19. In a double-blind randomized controlled study, he and his colleagues are comparing the drug degarelix (trade name Firmagon) to placebo for improving the clinical outcomes of nearly 200 Veterans who have been hospitalized with COVID-19. 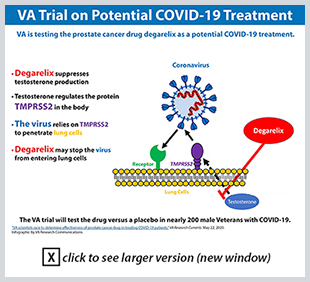 Degarelix is often used to treat cases of prostate cancer that metastasize. The male hormone testosterone can fuel the spread of prostate cancer. Degarelix rapidly but temporarily suppresses the body’s production of testosterone, which regulates the protein TMPRSS2. The virus that causes COVID-19, a respiratory disease, relies on TMPRSS2 to penetrate lung cells. By using degarelix, Rettig and his team believe they can reduce the production of TMPRSS2 in lung tissue and prevent the virus from entering lung cells.

“Anytime we’re doing a clinical trial for advanced prostate cancer, there’s not that much of a time pressure where we’re looking at days,” he says. “This is something where the pressure to deliver in a timely fashion is very high because of the lethality of this disease and the potential for it to expand, as well as the fact that we don’t have a really good viable therapy for sick patients with COVID-19.”

'Something that has global impact’

To Rettig, the trial could have implications far beyond VA.

“This is not about just helping people in VA,” he says. “This is something that has global impact because of the lack of treatment for COVID-19 and all of the fear and anxiety that accompanies this pandemic. So most importantly, I would like to be able to make an impact for the millions of people who are affected and are concerned about getting infected with this virus. So many people are dependent on something that may reduce the severity of COVID-19. This drug has great potential.”

Rettig designed the trial, known as HITCH, in just a few weeks. Patient enrollment began in mid-May. About two-thirds of the 200 participants are taking degeralix, with the rest assigned to placebo. He hopes to complete patient data analysis in no more than five months.

The Prostate Cancer Foundation (PCF) is not directly supporting the trial. But the VA medical centers that were chosen for the testing—West Los Angeles, Puget Sound in Washington State, and New York City (Manhattan and Brooklyn)—are in COVID-19 hot spots where there are VA-PCF Centers of Excellence. That means an infrastructure already exists with investigators, rooms, and equipment for research that normally focuses on prostate cancer but is now targeted at a COVID-19 treatment.

Coordinators of the trial are in the process of also recruiting the VA hospitals in Chicago, Philadelphia, and the Bronx, New York.

“This is an amazing story of dedication and nimbleness in VA, which is jumping into the COVID-19 research fight during a time of national emergency, and it will be remembered as an act of patriotism for years to come,” says Dr. Jonathan Simons, president and CEO of the Prostate Cancer Foundation. “The clinical research nurses, data managers, pharmacists and everyone else on the VA-PCF teams are voluntarily `redeploying’ their expertise to COVID-19 TMPRSS2 anti-viral clinical trials, including the use of degarelix.”

The University of California, Los Angeles, where Rettig directs the prostate cancer program in the Institute of Urologic Oncology, is involved in the analysis of research specimens but not the clinical side of the VA trial.

Veterans in trial do not have prostate cancer

To be clear, the Veterans in the trial are not undergoing treatment for prostate cancer. They have been hospitalized only because they have contracted COVID-19. Symptoms from the disease include signs of a cold or the flu, trouble breathing, persistent chest pain or pressure, or bluish lips or face. The sickest patients who are on ventilation due to COVID-19 are not being enrolled. “We think that population is really suffering from an overactive immune response to the virus,” Rettig says. “Therefore, the therapy we’re using in the trial, which aims to reduce the virus and its entry into the human lung tissue, probably will not be relevant in patients who are the most severely ill. We’re trying to narrow this down to men who are sick enough to require treatment but not sick enough to be in the ICU.”

The study is not suitable for female Veterans. Evidence exists that degarelix may have the opposite effect in the female body by increasing TMPRSS2 production and thus worsening the severity of COVID-19 symptoms.

Plus, research has shown that men in the United States and other countries are much more likely to suffer severe effects from coronavirus than women.

“Male hormones and female hormones seem to have different or opposing effects for COVID-19,” Rettig explains. “We think male hormones may be driving the susceptibility and severity of COVID-19, whereas female hormones [estrogen] seem to suppress the severity of the disease. So if we were to give the same therapy to a woman and lower female hormone levels, we might actually exacerbate COVID-19. That’s why we didn’t want to use this therapy with women.”

The HITCH trial comes on the heels of an Italian-based observational study that showed men with prostate cancer who were being treated with drugs that suppress male hormones had much better COVID-19 outcomes. The study suggested that men with prostate cancer who were taking ADT were four times less likely to be infected with the coronavirus than men who were not on ADT and five times less likely to die.

The researchers looked at more than 9,000 patients with confirmed COVID-19 in the Veneto region of Italy. They used data on all cancer patients in the region for comparison.

Degarelix was one of the hormone suppression drugs the patients used, along with lupron (trade name Leuprolide). Those medications all have the same effect when used on chronically ill people, Rettig notes.

Rettig says the findings from the study support his belief that degarelix may be effective in treating COVID-19. Degarelix was chosen over other drugs for the HITCH trial because it’s the only one that rapidly drops male hormone levels, he notes.

“On average, hormone levels drop about 90% in 24 hours with degarelix,” Rettig says, “whereas, with all of the other ADT drugs, it can take a few weeks to reduce testosterone levels. We don’t have the luxury of time when we’re talking about sick COVID patients who are hospitalized. So we chose degarelix. It works rapidly, and it’s temporary, and the effects on testosterone levels, as well as the side effects, resolve in just a few weeks. Most if not all of the side effects of degeralix are attributable to its long-term use for prostate cancer.”

Independent of the clinical trial, Rettig is also leading an observational study that involves nearly 40,000 VA prostate cancer patients who are on ADT drugs, such as degarelix. He and his colleagues are looking at data to determine if these patients have a lower severity rate of COVID-19, compared with patients who are not on ADT therapy. The Italian-based study concluded that hormone therapy protects prostate cancer patients from contracting COVID-19 and experiencing symptoms from the disease.

Rettig first had the idea for the clinical trial when reading a research paper that appeared in April in the journal Cell. The paper described how the TMPRSS2 protein lives on the surface of lung tissue, and how the coronavirus uses it to infect cells. “If you do prostate cancer research, you know that TMPRSS2 is regulated by male hormones,” he says. “It was natural to me to hypothesize that shutting down androgens to prevent TMPRSS entry into the lung cells could reduce the severity of COVID-19.”

It was “serendipitous,” Rettig says, how his idea took on a new life. He co-chairs a national VA program on precision oncology with Dr. Bruce Montgomery of the VA Puget Sound Health Care System in Washington state. During one of the group’s meetings, he presented his idea when someone in the meeting, Dr. Rachel Ramoni, VA’s chief research and development officer, told Rettig she had been contacted by two university researchers who came up with the same hypothesis.

The researchers, one at Columbia University and the other at the University of Alabama at Birmingham, had applied artificial intelligence and computational genomics techniques to emerging COVID-19 data. That approach produced lab evidence suggesting that male hormones trigger the growth of TMPRSS2 on lung tissue. Ramoni immediately put Rettig in touch with the two university researchers.

“Rachel mobilized a lot of VA resources to bring the trial to fruition,” Rettig says. “It has been a very intense period. We’ve condensed a process that typically takes a minimum of 10 to 12 months into a matter of just weeks to get this trial approved and up and running.”

It helps, he says, that the VA facilities participating in the precision oncology program are in cities that have a high number of COVID-19 cases. “We already had the clinical trial infrastructure at these sites that could be repurposed from prostate cancer to COVID-19,” he says. “So instead of having to identify investigators at these sites to call and see if they’re interested, I already knew them.”

In the non-VA population, he says, studies using similar approaches are in the works at Johns Hopkins University and Harvard University.

For the future, Rettig is eyeing the possibility that male hormone reduction therapy could be used not only to treat disease but also to prevent people from being infected with coronavirus. He calls this a form of prophylactic therapy, not a vaccine, because it isn’t an immune-based approach.

“This would be a huge undertaking requiring thousands of patients,” he says. “We are quite some time away from this, but we may seriously consider it at some point.”

VA Secretary Robert Wilkie understands the crucial nature of the HITCH trial and others that VA is carrying out to find a treatment for COVID-19.

“Veterans who have contracted this virus are in need of immediate care,” he says. “This trial is an important step in advancing knowledge of a potential treatment for those infected with COVID-19. We are here to do everything in our power to preserve and protect life.”