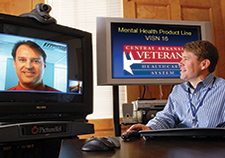 Drs. John Fortney (on screen) and Jeffrey Pyne were part of the team that worked on a VA study of telehealth for PTSD. (Photo by Jeff Bowen)

Drs. John Fortney (on screen) and Jeffrey Pyne were part of the team that worked on a VA study of telehealth for PTSD. (Photo by Jeff Bowen)

A new study on rural Veterans with posttraumatic stress disorder found that receiving psychotherapy and related services remotely can have positive effects.

"We know that 38 percent of VA patients diagnosed with PTSD live in rural areas, and that two-thirds live closer to one of VA's 825 community-based outpatient clinics [CBOCs] than to a large medical center," lead author Dr. John Fortney, a research health scientist at the VA Puget Sound Health Care System in Seattle, told Reuters. Fortney was based in Little Rock at the time of the study.

According to Fortney, hiring on-site psychiatrists or psychologists with PTSD expertise is not feasible at many CBOCs.

Of the 265 participants, half received usual care—that is, they were eligible to receive any services offered at their local CBOC, to include on-site primary care physicians, psychiatric advanced practice nurses, social workers, and more. Additionally they had the option to receive care at the more distant VA medical center.

The remaining 133 participants received cognitive processing therapy delivered remotely, via interactive video hook-up with psychologists based at the medical center. They were also connected to a broader care team at the VA medical center, receiving calls from nurse care managers and pharmacists, and undergoing psychiatric consultations via video chat at their CBOC.

Cognitive processing therapy is one of the two main forms of evidence-based psychotherapy used in VA. The other is prolonged exposure therapy. In a 2009 interview with VA Research Currents at the outset of the study, Fortney explained why this form of therapy (CPT) is well-suited to video sessions:

"It's a highly structured therapy, and much of the benefit derives from patients completing homework assignments and practicing new skills outside the therapy session," he said. "These activities occur between interactive video sessions with the therapist and are not likely to be affected by the mode of delivery."

Extending the reach of specialized services

After a year, only 12 percent of the usual care group received cognitive processing therapy. As a group, on average, they showed little, if any, improvement in PTSD symptoms or severity. Participants in the telemedicine group, on the other hand, were much more likely to engage in care, with nearly 55 percent receiving cognitive processing therapy. They also had larger decreases in PTSD scores at both six months and one year.

Differences in medication between the two groups were minimal.

According to Fortney, the long drives associated with usual care prevented that group from taking full advantage of available treatment, which led to lower improvement rates. The telemedicine-based collaborative care model, on the other hand, allowed patients to be more engaged in their own care, something researchers often say is integral to recovery.

"Dr. Fortney's intervention developed a method to extend the reach of specialized PTSD services to the community primary care clinics by using telehealth technology," Dr. Michele Spoont, a health psychologist at the Minneapolis VA Health Care System, told Reuters. "Not only does it make it easier for Veterans to get the specialized treatments, but maybe it will help those Veterans who are hesitant to go to a mental health program get evidence-based PTSD treatment."

Fortney's results are similar to those from another recent VA study on the remote delivery of cognitive processing therapy for PTSD. That study was based in Hawaii and involved 125 Veterans. Published in the Journal of Clinical Psychiatry in May 2014, it found that therapy via video teleconference produced outcomes that were as good as from in-person treatment.