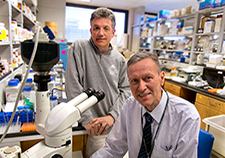 A new drug that not only blocks plaque-forming amyloid but also spurs new brain cells may be a potent weapon in the war against Alzheimer's disease, if animal results pan out in humans.

Results from a study in mice appeared online Aug. 12, 2014, in the journal Molecular Psychiatry. Lead author Dr. Sam Gandy, with the James J. Peters VA Medical Center in the Bronx and Icahn School of Medicine at Mount Sinai, says the drug is promising for its varied effects and because it has already been shown safe, albeit on a limited basis, in people.

"We are cautiously hopeful that this drug might arrest Alzheimer's disease at an early stage so that patients can remain functional for more extended periods," Gandy said in a news release from the Cure Alzheimer's Fund, which helped support the research.

Gandy's team used an investigational drug known as a BCI-838, from San Diego-based Brain Cells, Inc. The company is a licensee of the Japanese pharmaceutical firm Taisho. The oral drug proved safe in a two-week clinical trial involving young healthy adults, presented at the 2012 Society for Neuroscience meeting. More study is needed, but researchers say the early results suggest the drug is safe and readily absorbed in the body.

Gandy says his group hopes to soon launch a phase 1 safety trial of the drug in older adults who have mild Alzheimer's or its precursor, mild cognitive impairment.

Actually, BCI-838 is a "prodrug." It gets converted to its active form, BCI-632, only after being metabolized in the body. BCI-632 blocks proteins in the brain known as Group II metabotropic glutamate receptors. These receptors normally bind with glutamate, a neurotransmitter that is abundant in the brain, to enable memory and other brain functions.

But the receptors also play a role in Alzheimer's. Gandy's lab showed in past studies that the receptors are central to the production of amyloid. Amyloid—or, more precisely, beta amyloid—is one of the main signs of Alzheimer's. The sticky protein clumps into structures called plaques that build up between neurons like grains of sand.

In the new study, Alzheimer's mice that received daily doses of BCI-838 over three months showed improved learning, as well as reduced anxiety. They also showed reductions in the levels of beta amyloid in the brain, and the formation of new brain cells, or neurons, in the hippocampus, a part of the brain crucial for memory.

Gandy and his coauthors write that the drug, or similar ones that block the same glutamate receptors, "may offer a unique package of relevant properties as an Alzheimer's disease therapeutic or prophylactic by providing both attenuation of neuropathology and stimulation of repair."

Drug to be studied for TBI

Gandy's group is also now looking at BCI-838's potential to help Veterans with traumatic brain injury (TBI). Stimulating the growth of new brain cells might help that condition just as it does Alzheimer's.

Gandy will be working with Dr. Greg Elder, chief of neurology at the Bronx VA, who conducts and has published VA-supported studies on a rat model of traumatic brain injury. Elder developed the model together with Dr. Stephen Ahlers, director of the Operational and Undersea Medicine Directorate at the Naval Medical Research Center in Silver Spring, Md.

To further the research, the Bronx VA expects to install a blast tube that simulates the effects on the brain of improvised explosive devices (IEDs).

The experimental blast system, says Gandy, "will truly concretize our ability to work—and to lead—in this area."