Many Veterans suffering from blast concussions may have hormone deficiencies that mimic some of the symptoms of posttraumatic stress disorder and depression, according to researchers with the VA Puget Sound Health Care System and the University of Washington.

The researchers screened 35 Veterans with blast injuries. They found that 42 percent had irregular hormone levels indicative of an underactive pituitary gland—also known as hypopituitarism. The condition can often be controlled by replacing the deficient hormones. 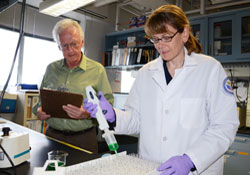 "This could be a largely missed opportunity for successful treatment," says study leader Charles Wilkinson, PhD, a research associate professor in psychiatry and behavioral sciences at the university, and a research physiologist with VA's Seattle-based Geriatric Research, Education and Clinical Center.

Wilkinson's group presented the findings at the Experimental Biology 2013 meeting in April. Some of the data were published in the journal Frontiers in Neurology last year.

As many as 20 percent of returning Veterans have experienced at least one blast concussion. Wilkinson says the Department of Defense has introduced clinical guidelines alerting providers to look for hormone problems in blast-exposed Veterans. He says he hopes VA will adopt similar guidelines based on the emerging research.

Wilkinson says past studies suggested that up to half of people who suffer traumatic brain injuries later have low pituitary hormone levels—a drop in the concentrations of at least one of eight hormones produced by the pituitary, a pea-sized gland beneath the base of the brain.

Past research, though, has focused mainly on civilian head injuries, such as from car accidents. The VA-UW study aimed to learn whether newly returned Veterans who had suffered mild traumatic brain injuries from blasts had similar rates of hypopituitarism.

The researchers took blood samples from 35 Veterans who had received a diagnosis of a blast concussion about a year prior—enough time for hormone changes to become evident. About 42 percent of these Veterans showed abnormally low levels of at least one of the pituitary hormones.

The most common deficiency was in human growth hormone. Low levels can cause symptoms similar to those of PTSD and depression, as well as raise the risk of heart attack and stroke. The second most common problem was hypogonadism—changes in sex hormones that can affect body composition and sexual function. 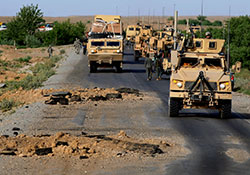 On a southern Afghanistan road in 2010, U.S. Army troops pass by craters that had been created just hours before by improvised explosive devices. IEDs have been the main cause of traumatic brain injuries among U.S. troops in recent wars. (Photo by Kenny Holston/USAF)

The researchers also found that some Veterans had abnormal levels of vasopressin and oxytocin. Low levels of oxytocin affect people's ability to bond with others, and vasopressin is linked to other mental health issues. Problems with these hormones, and with growth hormone, could contribute to difficulties with personal relationships, notes Wilkinson.

The researcher says that even if 10 percent of blast-affected Veterans have hypopituitarism, it's a problem that physicians—especially in DoD and VA—need to be more aware of.

The group is planning further research to document the extent of the problem among blast-affected Veterans. Wilkinson says future studies will use various medical, cognitive, and psychological tests to show the effects of the hormone deficiencies. Ultimately, he says, the group aims to "help develop and refine cost-effective and efficient screening procedures to best select those Veterans who would be most likely to benefit" from hormone evaluations after blast concussions.

Based in part on an American Physiological Society news release.