It should come as no surprise that based on a recent VA study, Veterans who felt they needed treatment for posttraumatic stress were more likely to seek out, and eventually receive, care. But why some Veterans feel they need care, and what motivates them to seek out help in the first place, is less obvious.

Estimates of PTSD rates from VA's National Center for PTSD range from 11 to 20 percent of Iraq and Afghanistan Veterans, to up to 30 percent of Vietnam Veterans. Yet nationwide only about 8 percent of the five million Veterans using VA care have been diagnosed with the disorder. For those left undiagnosed and ultimately untreated, PTSD can have life-altering consequences, including hospitalization, unemployment, and poverty.

"About 30 percent of Veterans with untreated PTSD take a more chronic course," says Dr. Michele Spoont, a clinical and research psychologist at the Minneapolis VA Health Care System. "They are more likely to have failed marriages, be indigent, and have a number of medical problems. It's one of those things that cascades over time. You lose your job. Your marriage falls apart, and it just accumulates."

According to Spoont, who is also a professor at the University of Minnesota, there are many factors that play a role in whether a Veteran seeks treatment for PTSD, including age, distance from a clinic, and the severity of the illness. Hoping to better understand those factors, and ultimately increase the number of Veterans seeking help, Spoont and her colleagues studied more than 7,600 Veterans recently diagnosed with PTSD. Veterans completed surveys on their perceived treatment need, access to care, beliefs, and whether they had received any sort of social encouragement. The results were published online in February in Psychiatric Services.

"When patients have a delay initiating care they're less likely to follow through," says Spoont. "Part of what we're doing at VA with initial screening is to address this. If we can get a Veteran in to a specialist that same day, it enhances their chance of success."

Belief also played a major role when it pertained to confidence in treatment. "Veterans have to believe they can get better, that the treatment works," says Spoont, "and they need to believe that they can do it."

Organizations like the National Center for PTSD are working on educating Veterans and the general population about PTSD to help inform their decisions. "We're finding out that patients know something is wrong, but they don't know what it is," says Spoont. "They may see their peers struggling as well and not realize there is a problem."

Not surprisingly, Veterans in the study who realized they had a problem and were positive about treatment also tended to have strong social support from family, friends, or other Veterans.

"Getting family members involved in care can lead to better outcomes," says Spoont. "If someone is having problems, the first thing they tend to do is go to their peer group for advice. We wondered how much effect the response of that network would be, and, as it turned out, the influence factor was extremely high.

"Everyone is working hard at educating people on PTSD," says Spoont, "but there are still stigmas associated with it. Maybe getting family members to help bridge that gap is a way to help those Veterans receive care.

"There are opportunities here," Spoont says of the results. "It's something VA is looking at. We're improving initial screening to speed up mental health treatment. We want to help Veterans get through this and give them ways to engage in treatment rather than avoid it." 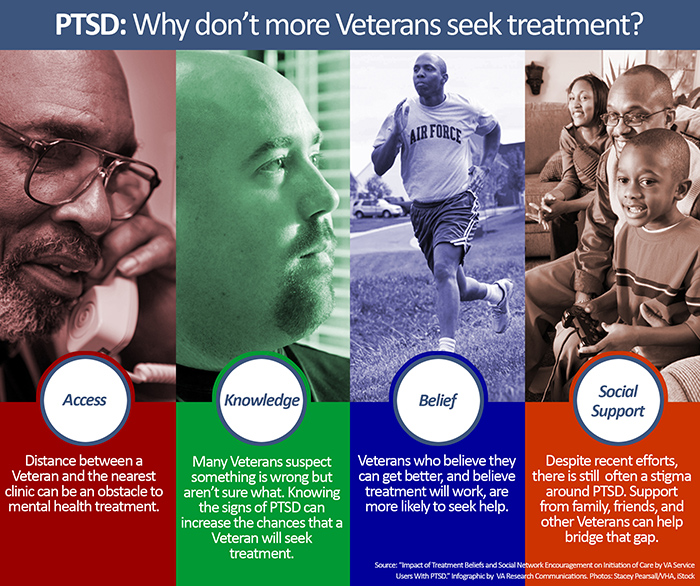