Diabetes wound care: Much progress in past 25 years, but challenges remain 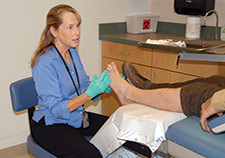 For Veterans and others with diabetes, foot care is super-critical.

The disease can damage nerves in the feet, causing a loss of feeling. Minor cuts, scrapes, and blisters go unnoticed, and poor blood flow slows healing. Without careful and frequent attention, these wounds can become infected and worsen to the point of requiring amputation of a foot or leg.

Of the 16 million Americans with confirmed diabetes—including about one in five VA patients—about a quarter will have foot problems related to the disease. People with diabetes account for about two-thirds of lower-limb amputations in the U.S.

Longtime VA clinician-researcher Dr. Margaret Doucette has been in the forefront of providing top-notch wound care to Veterans with diabetes or related problems. Today, she is chief of physical medicine and rehabilitation at the Boise VA Medical Center. VA Research Currents interviewed Doucette about a VA study on the topic that she published exactly 25 years ago, and how the field has progressed since then.

Title: Amputation prevention in a high-risk population through comprehensive wound-healing protocol
Journal: Archives and Physical Medicine and Rehabilitation (October 1989)
Authors: Doucette MM, Fylling C, Knighton DR
VA site: Minneapolis
What was studied: The study included 24 Veterans with diabetes or vascular disease, or a combination. All had received a recommendation for amputation from a surgeon. The study tested an aggressive, comprehensive wound-care protocol that used a number of therapies: restoration of blood flow, infection control, wound debridement [cleaning away of dead or infected tissue], orthotics, and a special wound-healing gel based on the patient's own blood. The result? All but four of the Veterans in the study were able to avoid amputation.
What was learned: Doucette and colleagues concluded that "an aggressive, comprehensive amputation intervention program can prevent the emotional, functional, and economic costs of limb loss in most high-risk patients."

Back in 1989, was the assumption that not much could be done to prevent amputation in high-risk patients? Did this study help change that view?

This was one of the first studies using advanced therapies to try and stimulate healing. Along with other methods, we used platelet-derived growth factors [proteins that trigger cell growth]. At the time, it was a novel intervention to enhance healing. Until then, the best we could do was maximize the body's ability to heal by trying to control variables that influence healing—blood-sugar management, revascularization, off-loading of diabetic ulcers. The use of a topical application of growth factors was an early attempt to actually stimulate the healing process. In the ensuing years, there have been many advanced therapies developed. These include products that involve the use of live cells harvested from neonatal foreskin [also known as "skin equivalents"]; matrixes, such as pig gut, which provide a "ladder" for cells to migrate across wounds; and various growth factors, which have been well-researched.

Among the approaches you used in 1989, which are still used today?

The basic principles of wound healing remain very much the same: Identify and treat infection; address vascular insufficiency; prepare the wound bed with debridement; improve glucose control; and off-load, or protect, the wound.

In the world of infection, we have come to better understand the presence and role of biofilms—these are communities of bacteria that form an impermeable barrier in the wound or on an implant. This reduces the effectiveness of antibiotics.

Techniques of revascularization have become more sophisticated, though they are similar in concept to 25 years ago. Hyperbaric oxygen therapy has gained some traction. We still struggle with how to effectively off-load a plantar diabetic foot ulcer, as this relies considerably on the patient's buy-in. The total contact cast remains one of our best tools, but it is one of the least utilized by clinicians, partly because it is not well-accepted by patients.

Importantly, the field of wound healing has become a specialty in and of itself. There is certification and more training available, so our practitioners are better-versed in treatment options.

Overall, compared with 25 years ago, how has the outlook improved for those with diabetes who may be at risk for amputation?

Sadly, the risk of amputation still remains high for those with poorly controlled diabetes. Much of the damage has been done before they develop an ulcer, and patients often delay seeking care or have difficulty fully participating in a care plan focused on limb salvage.

One of the greatest tools for successful intervention continues to be that of the interdisciplinary team, a model which VA embraced early on. Successful limb salvage always starts with the interdisciplinary team, and the VA model has this as its foundation. New areas of research can be integrated into this model. VA has a large population of patients at risk for amputation, making it critical that we continue to examine how we can reduce amputation rates.