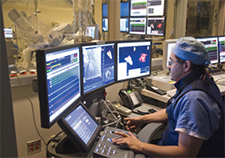 The CART Program tracks heart procedures at all VA cath labs, like this one at the Pittsburgh VA. Researchers used CART to study patient outcomes related to the anti-clot drug clopidogrel. (Photo by Glenn Hangard)

The CART Program tracks heart procedures at all VA cath labs, like this one at the Pittsburgh VA. Researchers used CART to study patient outcomes related to the anti-clot drug clopidogrel. (Photo by Glenn Hangard)

The anti-clot medication clopidogrel (sold as Plavix) is prescribed as part of follow-up care for patients who have had balloon angioplasty and stenting to clear a blocked or narrowed artery. The drug helps prevent blood clots that could cause a heart attack or stroke.

But some patients delay filling their prescription. According to a new VA study, those patients might be at more than twice the risk for heart attack or death within 90 days of hospital discharge.

Senior study author Dr. Michael Ho and colleagues at the Denver and Boston VA medical centers analyzed the outcomes of more than 8,000 VA patients who had the heart procedure at any of 60 VA sites.

Patients who didn't fill their prescription at the VA pharmacy on the day of discharge were considered as having a delay. At the same time, the study excluded those who didn't fill the prescription at all within the first month, in the assumption they might have already had a supply of the drug, or that they went to a non-VA pharmacy. In all, about 7 percent of the patients had a delay. This compared very favorably with the results seen in a similar study that looked at Medicare (non-VA) patients.

However, those VA patients who delayed were 2.34 times more likely—compared with those who received the drug upon discharge—to suffer a heart attack or die within 90 days.

The study also identified wide variation among the VA sites in the study, in terms of how many patients delayed filling their prescription. One best practice noted by the authors: In some VA hospitals, pharmacists deliver medications to patients' bedsides before they are discharged.

The authors say future studies should focus on this and other ways to ensure timely filling of clopidogrel prescriptions. (American Heart Journal, September 2014)