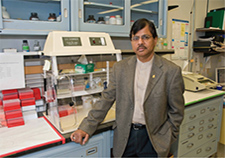 VA researchers in Kansas City, Mo., gained more insight on a protein that they say may thwart an aggressive form of breast cancer, and pancreatic cancer as well.

The team figured out the mechanisms behind CCN5, a protein they say keeps certain cancers from progressing.

CCN5 is part of a family of proteins that help with organ and blood-vessel growth and other functions. In past studies, the Kansas City group found the protein is relatively absent in invasive breast cancer, and more abundant in less aggressive tumors. That led to the discovery that it helps stop cancer from spreading, at least in animal models.

Now the team, led by Dr. Sushanta Banerjee, has identified key pathways in the process. CCN5, they learned, boosts output of a tumor suppressor protein known as p27Kip1 and moves it to the nucleus of the cell. When CCN5 is absent, the tumor-squashing protein is found mostly in the cytoplasm, the liquidy gel that surrounds the cell nucleus. That appears to allow the cancer cells to grow and spread.

They also injected cancer cells into mice to see the effect of CCN5 on tumor growth.

The samples and cells were from patients with triple-negative breast cancer (TNBC), a form of the disease that doesn't respond to hormonal therapy as does other breast cancers, and that can be especially aggressive and prone to reoccur.

"TNBC is a devastating disease" for which effective treatment is lacking, says Banerjee. "Our studies found that CCN5 can prevent the progression of TNBC, at least in an animal model. Thus, activation of CCN5 may have the therapeutic potential to kill TNBC." He says the same is true of pancreatic cancer, based on past studies in his lab. (Oncogene, online Aug. 18, 2014)