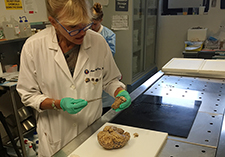 Dr. Ann McKee, chief of neuropathology at VA Boston Healthcare System, was named 2017 Bostonian of the Year by the Boston Globe, for her groundbreaking work on chronic traumatic encephalopathy (CTE), a condition that occurs after long-term, repetitive injuries to the brain.

McKee is director of the VA-BU-CLF Brain Bank, a joint endeavor between VA, Boston University, and the Concussion Legacy Foundation, and has devoted her research career to understanding traumatic brain injury and Alzheimer's disease. She is also professor of neurology and pathology at Boston University School of Medicine.

CTE is a degenerative process that occurs in the brain when an individual undergoes repetitive, traumatic strikes to the head. McKee is finding increasing evidence of this condition in professional athletes and also members of the military who were deployed to combat zones and sustained blast injuries.

Her research into the prevalence of CTE has earned increasing public attention over the last few years. In July 2017, McKee and her colleagues published a study on CTE in JAMA. The team examined 202 brains from deceased American football players and found evidence of CTE in 87 percent of those samples. More alarming, 99 percent of the brains belonging to former NFL players—110 out of 111—were diagnosed with CTE. However, these results may not be representative of all football players and may reflect selection bias, caution researchers. Public awareness of the link between CTE and repetitive head injury may have prompted family members to participate in the study. Also, family members with loved ones who developed symptoms suggestive of CTE may have been more likely to participate in the study.

McKee has been sounding the alarm on traumatic brain injuries in football players for many years, according to the Globe. In 2008, she teamed up with former pro wrestler Chris Nowinski, who was recruiting brain donations from deceased athletes. When McKee autopsied those brains, she found tangles of tau proteins, a biomarker found in people with Alzheimer's disease and one that is also present in CTE.

"There are many parallels between concussive injury experienced during contact sports and exposure to blast and concussive injury experienced by Veterans. In addition, many Veterans are athletes, and play football, soccer, baseball, volleyball or participate in boxing," said McKee in an interview with VAntage Point, the official VA blog. "Our research shows that the long-term effects of concussive and blast injuries on the brain can be very similar, regardless of how the brain injuries occurred."

McKee notes that it is the accumulation of small, sub-concussive injuries that are most damaging to the brain when playing football, and not a concussion itself, according to the Globe. Her work has also shown evidence of brain injury risk in children 6 to12 years old who play tackle football.

* To find out about Dr. McKee's work on the neurobiology of Veterans with PTSD, read "Untangling PTSD." Listen to Dr. McKee speak about her research on CTE in Veterans and professional athletes.