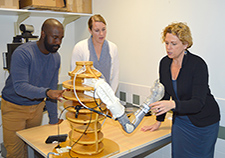 For nearly a decade, Dr. Linda Resnik has been researching prosthetic technologies and the outcomes of upper-limb amputation procedures at VA and Defense medical sites and in academia. A research scientist at the Providence (Rhode Island) VA Medical Center, she has written many papers on her findings and helped develop the VA-DoD clinical practice guidelines for upper-limb amputations issued in 2014.

But Resnik has grown frustrated with the state of science in upper-limb prostheses, particularly the lack of studies that compare new technologies with older, commercially available devices. She's also well aware of the limitations of upper-limb prostheses. Only 7 in 10 upper-limb amputee Veterans from the conflicts in Iraq and Afghanistan were satisfied with their prosthesis, compared with more than 9 in 10 lower-limb amputees, according to a 2011 study by VA's Office of Inspector General (OIG).

That study led OIG to call for an evaluation of the needs of Veterans with traumatic upper-limb amputations–the most common of which is at the transradial level, or just below the elbow–to improve satisfaction.

Resnik is confident her research team can provide important new knowledge. So is DoD's Orthotics and Prosthetics Outcomes Research Program, which in September awarded a $2.5 million contract to the Ocean State Research Institute, the nonprofit arm of the Providence VAMC, to do the evaluation.

Resnik is the study's main investigator. 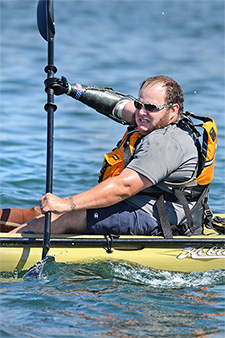 
"We need data to better understand the needs of people with upper-limb amputations and to assess their limitations in functioning, their participation in life roles, and their satisfaction with prosthetic devices and the amputation rehabilitation care that they have received," she says. "Data from the study will be used to improve the quality of amputation care in VA and DoD, and to guide their evidence-based clinical practice guidelines for prescriptions, provision of rehabilitation services, and FDA regulatory approval."

More than 1,000 Veterans in the study

The Providence VAMC is coordinating the three-year study with collaborating investigators from VA medical centers in Richmond, Virginia; Puget Sound, Washington; and Gainesville and Tampa, Florida; and from the Brooke Army Medical Center in San Antonio.

According to Resnik, a random sample of some 1,900 Veterans and active-duty service members with upper-limb amputations will be asked to participate. She expects about 1,100 will agree to take part. Participants will respond to survey questions about their amputations, their prosthesis use, the quality of their amputation-related health care, and how the amputation has impacted their lives. About 125 of the participants will also complete physical performance tests at one of the VA or DoD sites.

"This is a small component of the amputee population that's served in the VA, but it's a population that has somewhat unique needs and requires unique considerations."

Participants, including those in the performance phase, will be in the study for one year, with an initial survey and a one-year follow-up to assess changes.

Resnik expects this to be the largest and most comprehensive study of Veterans and service members with upper-limb amputations. She says Vets will be included regardless of their era of service or where and how they lost limbs. Prior national surveys were limited to Veterans and service members who lost limbs in the Vietnam War and the global war on terror, she notes.

Dr. Joseph Webster, medical director of the VHA Amputation System of Care at the Hunter Holmes McGuire VA Medical Center in Richmond, emphasizes that this isn't an "intervention" study that will look into the development or implementation of advanced prosthetics.

"It's really getting a better understanding of exactly how people with upper-extremity amputations function both with and without prosthetic devices," Webster says. "This is a small component of the amputee population that's served in the VA, but it's a population that has somewhat unique needs and requires unique considerations. The outcomes for these Veterans, as far as their prosthetic use and satisfaction, are still limited."

Although there are fewer Vets with upper-limb amputations than with lower-limb amputations, the medical community faces serious challenges when it comes to providing them with devices they are happy with. Resnik and Webster say that's largely because there is a much greater need for flexibility with upper-body limbs such as arms and fingers compared, for instance, with legs, and that replicating that degree of flexibility can be hard. Lower-limb prostheses are generally less complex, and the components are larger and more durable, they say.

In the 2011 OIG study, some Veterans said upper-limb prosthetics would often break and require frequent repairs. Others reported requiring multiple upper prosthetic limbs to ensure they would have at least one functional artificial limb. Many Vets with upper-limb amputations were not able to be fitted with a functional prosthesis and ended up not using one, or using one that was only cosmetic and not functional.

Webster says fitting an amputee with the right prosthesis for an upper limb is only a small part of the challenge.

"Although there have been lots of advances in upper-extremity prosthetic devices, we're still not really able to replicate the function of the upper extremity in the way that we're able to replicate the function of the lower extremity with a prosthetic device," he says. "So even if a Veteran with an upper-extremity amputation is able to be fit with a prosthesis, often they're not satisfied with the way the prosthesis functions and that it doesn't allow them to complete tasks that would normally be completed with their upper extremity."

"Upper-limb devices are actively controlled either through body-powered harnesses or myoelectric controls," electrical impulses generated by muscles in the body. "Active movement is necessary to open and close the terminal device or move other joints. Lower-limb devices, except on rare exceptions such as the powered knees and ankles new on the market, have no active movement, so they are mechanically simpler."

Resnik and her team are in the start-up phase of the study and are getting the approvals needed to begin recruiting participants. She expects to start acquiring data in spring 2017. 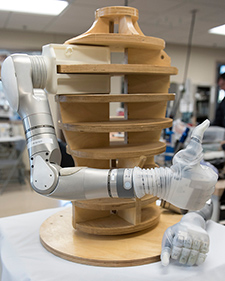