VA research being used to help children with heart defects 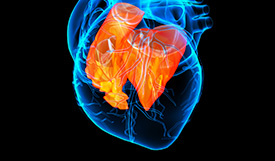 A team at Vanderbilt University Medical Center has harnessed VA Million Veteran Program (MVP) research to predict how well infants will respond to congenital heart defect surgery, in one of the first examples of MVP data being used for health research beyond Veterans.

Dr. Todd Edwards, an Army Veteran and genetic epidemiologist who led the Vanderbilt team, is also a leader in studies of genetic variation in MVP. In previous VA research, Edwards and his team discovered more than 200 new genetic variations linked to high blood pressure in adults.

Based on these findings, the team created polygenic risk scores for systolic and diastolic blood pressure. A polygenic risk score takes into account all of the variation in a person’s genes to rate their risk for a specific disease based on genetics.

In the Vanderbilt study, researchers applied these polygenic risk scores to infants to predict how well they would handle surgery for congenital heart defects.

Congenital heart defects are the most common birth defects in the United States. They affect 40,000 babies each year, according to the Centers for Disease Control and Prevention. About half of babies born with this condition require surgery.

As part of the surgery, doctors often give infants vasopressors, medications that increase blood pressure. The researchers analyzed the genomes of infants undergoing surgery using the MVP-developed polygenic risk scores in hopes that they could predict how well the infants would respond to vasopressors.

The findings could help inform treatment strategies and improve outcomes for children undergoing surgery, according to Edwards. Adding the polygenic risk scores to predictive models for how well children do after surgery could improve survival.

The impact of MVP research

MVP is VA’s national research program to learn how genes, lifestyle, and military exposures affect health and illness. Since its launch in 2011, more than 875,000 Veterans have volunteered, making MVP one of the largest genetic research programs in the world. Researchers take blood samples from volunteers for genetic sequencing and metabolic analysis. These data are then combined with Veterans’ medical records from VA’s electronic health records system to conduct large-scale studies, many times with hundreds of thousands of subjects. Research using MVP data has led to more than 100 new discoveries in a range of diseases affecting the Veteran population including cancer, depression, PTSD, cardiovascular disease, and hypertension.

The fact that MVP genetic research in adults could lead to better treatment in children shows the far-reaching benefits of MVP and the VA research program. “This was really interesting to us—the idea that discoveries made in adults related to the genetic determinants of a trait like blood pressure could matter in a pediatric population,” said Edwards.

Edwards is a U.S. Army Veteran and is also a participant in MVP.