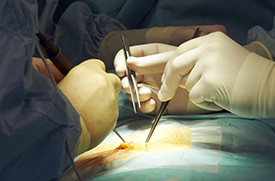 Inguinal (groin) hernias are quite common. According to the National Institutes of Health, about 27% of men and 3% of women will develop this type of hernia at some point in their lives. Those who have inguinal hernias must make the difficult decision whether or not to have surgery to repair the condition or wait and see if it gets worse—or, if surgery is definitely indicated, to decide what type of surgery is best.

Those decisions should only be made after consulting with a physician—and the information physicians share to help patients make their best choice often comes from the results of three significant VA studies.

An inguinal hernia is a condition in which soft tissue bulges through a weak point or a tear in the abdominal muscles. It can be quite painful, especially when a person coughs, bends, or lifts a heavy object. The likelihood of having an inguinal hernia increases with age, and the condition is common in people between 75 and 80 years old. Hernias are also more common in those with a family history of developing them, men who have had their prostates removed, and people with lower body mass index.

Treatments for inguinal hernias include watchful waiting to see whether the tear in the abdominal muscles grows; open hernia surgery, in which a surgeon makes a cut in the groin area and uses stitches and a piece of mesh to close and strengthen the abdominal wall; and laparoscopic hernia surgery, where a surgeon makes small cuts in the lower abdomen and inserts special tools to view and repair the hernia, then also uses mesh to close and strengthen the wall.

In 2004, a team of VA researchers from throughout the nation published a study in the New England Journal of Medicine comparing the effectiveness of open and laparoscopic surgery. The study included more than 2,000 Veterans with hernias.

The researchers concluded that laparoscopic surgery was associated with less pain and quicker return to activity than the open technique. However, the laparoscopic procedure had a higher rate of operative complications, and those who underwent this technique had a significantly higher recurrence rate of primary hernias.

In 2006, another team of VA researchers looked at whether men with minimal symptoms from their inguinal hernias can safely put off surgery until their symptoms increased. The team looked at 720 Veterans, 356 of whom had their hernias surgically repaired and 364 who watched and waited to see if surgery would be necessary. Two years later, both groups reported having less pain, but what the team called the “perception of pain unpleasantness” was significantly less in the surgical group than the watchful waiting group.

The team concluded that the watchful waiting strategy was safe for middle-aged men with minimal symptoms, and that surgery can safely be delayed, with minimal risk, until their pain increases. In a 10-year follow up study of patients who were enrolled in this study, published in 2013, almost 75% of patients in the watchful waiting group ended up having surgery eventually. The team now believes that men with inguinal hernias should be counseled that “although watchful waiting is a reasonable and safe strategy, symptoms will likely progress, and an operation will be needed eventually.”

The decision of what treatment to follow is an individual one, made in consultation with doctors, surgeons, or primary care teams. The work of VA researchers has helped clarify the risks and rewards of each alternative so that people can make the best possible decision based on available facts.