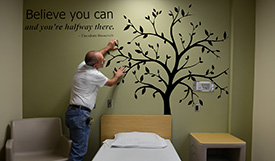 In an effort to decrease Veteran suicides in inpatient settings, VA in 2007 launched the Mental Health Environment of Care Checklist. A multidisciplinary group of VA employees developed the program to review inpatient mental health units and eliminate hazards that could increase the chances of patient suicide or self-harm. The group focused on architectural changes, with analyses suggesting that structural hazards such as anchor points like a hook on the wall or a ceiling vent were linked to most attempted or completed suicides.

Following implementation of the program, each VA hospital with a psychiatric unit treating actively suicidal patients began using a checklist to report the potential hazards that could allow one to take his or her life. The checklist asks questions such as whether beds, walls, and ceiling vents are free of anchor points for hanging.

A study published in 2017 found that the program led to a sharp decline in suicides at VA inpatient mental health units from 2000 to 2015. Plus, there was a sustained reduction in inpatient suicides during the last seven years of that period, with none occurring in the last three years.