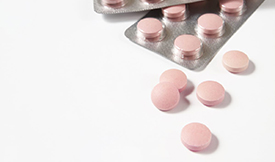 Janus Kinase (JAK) inhibitors are a class of newly-developed drugs that decrease the immune system’s ability to make certain enzymes. They come in pill form and are often used to treat rheumatoid arthritis because they reduce pain, swelling, and inflammation. VA researchers and researchers with Emory University found, in a study begun in 2015 and published in 2022, that some JAK inhibitors are also useful in treating or preventing viral infections such as HIV, the virus that causes AIDS.

The research team, and other investigators worldwide, also learned that JAK inhibitors are useful in treating some serious COVID-19 infections. A VA facility was the first in the world to use the medications in that way.

Repurposing an arthritis drug for infections

Inflammation occurs when the immune system sends out cells to fight bacteria or heal an injury. These cells attack bacteria or heal damaged tissue. If the body sends out inflammatory cells when someone is not sick or injured, that is called chronic inflammation. In rheumatoid arthritis, inflammatory cells and substances attack joint tissues. This leads to an inflammation that comes and goes, and can cause severe damage to joints with pain and deformities.

People with HIV are prone to chronic inflammation, even when their viral load (the amount of the HIV virus in their system) is under control. The research team focused on a JAK inhibitor called ruxolitinib as a way to reduce inflammation in people with the virus. According to principal investigator Dr. Vincent Marconi of the Atlanta VA Health Care System, “(our) study provided the first evidence in humans that this class of drugs could reduce inflammation for patients with an infectious disease.”

In early 2020, the researchers began recommending a different JAK inhibitor, baricitinib, to treat patients with HIV, because the drug is much less expensive than ruxolitinib, requires only one dose a day, and produces fewer negative drug interactions.

Testing the theory with COVID

When the COVID-19 pandemic began, according to Marconi, “it seem[ed] logical that the same rationale could be applied to [the illness], which accelerates the inflammatory process seen in chronic viral diseases such as HIV.” Early on in the pandemic, the team tested baricitinib in critically ill patients with COVID at the Atlanta VA.

That “compassionate use” test was followed by a number of additional studies, including a worldwide study of 101 patients on mechanical ventilation or ECMO (extracorporeal membrane oxygenation, a process in which blood is pumped outside of the body to an artificial lung that adds oxygen and removes carbon dioxide) in 12 countries. Marconi and other team members were part of this study.

As a result, the U.S. Food and Drug Administration issued an emergency use authorization for baricitinib to be used either alone or with the antiviral drug remdesivir for hospitalized patients needing supplemental oxygen, ventilation, or life support. The National Institutes of Health’s COVID-19 treatment guidelines now recommend baricitinib as a therapeutic option, added to dexamethasone, for patients recently hospitalized with systemic inflammation and rapidly increasing oxygen needs.

“Our extensive work with JAK inhibitors in the HIV space became a roadmap for tackling COVID-19 in record time,” concluded Christina Gavegnano, an Emory University assistant professor who is another member of the research team.

VA and Emory University hold several United States and foreign patent rights on the use of JAK inhibitors to treat coronaviruses, and licensed this technology to Eli Lilly and Company, an American pharmaceutical company. The department received more than $450,000 in royalty revenues in fiscal year 2021.