Dr. Robert Schrek’s work on the link between smoking and cancer 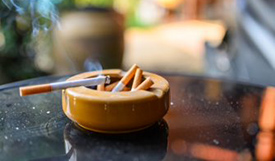 In 1964, then-Surgeon General of the United States Luther Terry and an advisory committee he convened issued a landmark report, based on the work of scientific researchers, linking smoking cigarettes with dangerous health effects including lung cancer and heart disease. Among the articles the committee used to prepare its report was one principally authored by Dr. Robert Schrek, a pathologist who began his research career with VA in the 1930s and continued his association with the Department until 1977.

They found that a relatively high percentage of cigarette smokers was found among patients with cancer of the respiratory tract compared to the control group, and that this positive correlation between cigarette smoking and respiratory cancer appeared to be both statistically and biologically significant. “There is strong circumstantial evidence,” Schrek concluded, “that cigarette smoking was an etiologic factor in cancer of the respiratory tract.” (Etiologic factors are those that cause or contribute to the development of a disease or condition.)

A 1989 article, “American Physicians and Tobacco Use,” in the Bulletin of the History of Medicine, noted that “not until the 1950s did a sufficiently critical mass of publications come together with new scientific viewpoints so as to shift medical scientists’ attention to primary carcinoma of the lung, at which point for the first time a significant number of investigators entertained the idea that there might be a connection between smoking and lung cancer.” The author cited Schrek’s work as one of the earliest of those publications.

Schrek’s work was followed by the work of Dr. Oscar Auerbach, of VA's East Orange hospital, now the East Orange campus of the VA New Jersey Health Care System. Auerbach's landmark animal research study, published in 1956, found that smoking for three years caused major changes in the lungs of animals who were taught to inhale cigarettes—and that many developed cancer. His work is described in this VA Research in Action article.

Both VA studies were used in the conclusions of the 1964 Surgeon General Report, and on the general consensus today that smoking “leads to disease and disability and harms nearly organ system of the body. It is the leading cause of preventable death,” according to the Centers for Disease Control and Prevention.

Smoking and health: Report of the Advisory Committee to the Surgeon General of the Public Health Service. U.S. Department of Health, Education, and Welfare. 1964.