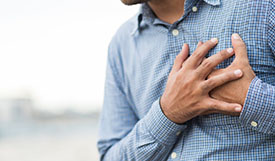 In 2007, VA researchers and their colleagues at the Canadian Institutes of Health Research published the results of a major study comparing two approaches to treating coronary artery disease. The study was called the Clinical Outcomes Using Revascularization and Aggressive Drug Evaluation (COURAGE) trial. Today, thanks to this trial and others, cardiologists throughout the world advise their patients with stable coronary artery disease that if they take their medicine, exercise regularly, and successfully manage their diet, they have a good chance of avoiding additional procedures, including bypass surgery. In a 2018 editorial, an editor of the Journal of the American College of Cardiology wrote that the results of the COURAGE study, along with those from another major study, “strongly reinforce current risk-reduction guidelines” for coronary heart disease.

One of the approaches the team looked at involved opening narrowed coronary arteries with percutaneous intervention (PCI), a non-surgical procedure that uses a catheter (a thin flexible tube) to mechanically widen their arteries. During PCIs, a small mesh structure called a stent is often placed to keep the arteries open. In the COURAGE trial, PCI was combined with aggressive medication for some study participants who had chronic, stable angina as a way to prevent heart attacks and deaths in Veterans who do not require emergency care. (Angina is a condition marked by severe pain in the chest and other locations caused by an inadequate blood supply to the heart.)

Other study participants received aggressive medication and lifestyle intervention only. All patients received drugs to lower their blood pressure and cholesterol levels, and received comprehensive lifestyle counseling regarding smoking cessation, regular physical activity (at least three times per week), nutrition, and weight management. The randomized, controlled study involved 2,287 patients with stable coronary artery disease, each of whom had chest pain at least several times a week.

After following each patient for five years, the team found that the rates of death, non-fatal heart attacks, strokes and hospitalization were the same for those who underwent the PCI procedure as those who did not. Taking medicine as directed, exercising regularly, and successfully managing diet gives patients the opportunity to avoid angioplasty procedures and the risks associated with them.

In 2015, the COURAGE team published long-term survival data on a subset of patients from the original study and found the team’s initial conclusions appeared to be correct: there was no advantage to PCI over optimal medical therapy in terms of staying alive, the only outcome the team tracked.

While many cardiologists originally resisted the study’s conclusions, today nearly all cardiologists attempt to improve their patients’ lifestyles as a first treatment resort. Of course, patients having heart attacks and other seriously ill patients may require more serious interventions, but treating stable coronary artery disease with lifestyle changes and medication is a widely accepted practice in the United States and throughout the world.