New research consortia will focus on PTSD and TBI 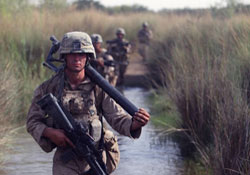 Marines patrol in Helmand province in Afghanistan in 2010. New consortia funded by VA and the Department of Defense will ramp up research on two of the most pressing health issues affecting returning Veterans: PTSD and mild traumatic brain injury. (Photo by Cpl. Ned Johnson)

VA and the Department of Defense announced in August the formation of two jointly funded research consortia to study posttraumatic stress and mild traumatic brain injury. The agencies will spend $107 million over five years to support the research, as part of a larger National Research Action Plan initiated by the Obama White House.

The Consortium to Alleviate PTSD (CAP) will coordinate teams of researchers at the University of Texas Health Science Center at San Antonio, San Antonio Military Medical Center, and VA Boston Healthcare System, as well as other sites. CAP will work to advance prevention, diagnosis, and treatment of PTSD by bringing together researchers with diverse approaches spanning neuroscience, genetics, psychology, and other fields. One aim will be to discover reliable biomarkers of PTSD, such as proteins in the blood or specific patterns that show up on brain scans. Such findings would be useful for diagnosis and possibly for identifying new treatments.

"Historically, PTSD has been considered … a chronic, lifelong disorder that is difficult to treat, particularly in military combat Veterans," said Alan Peterson, PhD, director of the consortium. "However, results of studies of PTSD in civilian populations demonstrate that a large percentage of patients have been able to [achieve] remission or recovery. Although the term 'cure' is rarely used in reference to PTSD, we believe it is possible." Peterson, a retired U.S. Air Force lieutenant colonel, is a clinical psychologist and UT professor of psychiatry.

His co-director is Terence Keane, PhD, of the VA Boston Healthcare System, VA's National Center for PTSD, and Boston University. Keane said CAP will address questions such as, "Is combat-related PTSD uniquely different and more difficult to treat [than civilian PTSD]? Would outcomes improve with early interventions delivered soon after trauma exposure? Can combat-related PTSD be cured?"

CENC director David Cifu, MD, a polytrauma specialist at the Richmond VA, is also VA's national director for physical medicine and rehabilitation. Speaking with the Times Dispatch in Richmond, he said, "This consortium is focused on concussions or mild brain injuries, particularly those sustained in combat, but we will also look at those in the civilian and sports sectors." One area of study will be the link between brain injuries and neurodegenerative diseases such as Parkinson's or Alzheimer's.

Cifu said moderate to severe brain injuries—including those resulting in comas—have been studied extensively for more than 30 years, whereas mild brain injuries have received heavy attention from scientists only more recently, due to the wars in Iraq and Afghanistan and increased concern among professional and school athletes, especially football players.

Said Cifu, "Our charge is not to stick within the box."