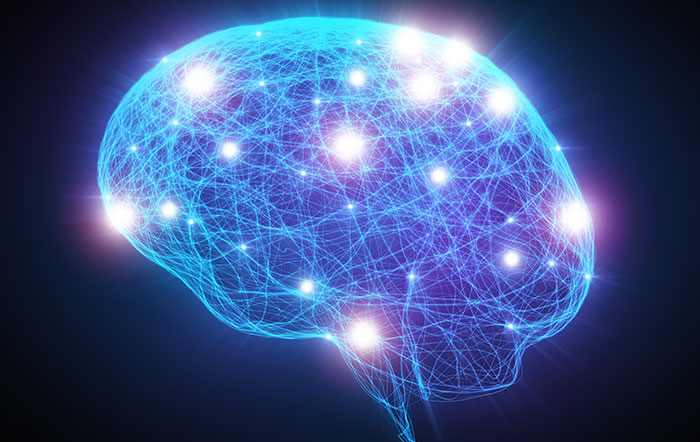 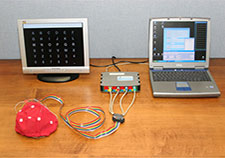 The photo shows the elements of the Wadsworth brain-computer interface. The user wears the electrode-fitted cap. (Photo courtesy of Wadsworth Center)

The photo shows the elements of the Wadsworth brain-computer interface. The user wears the electrode-fitted cap. (Photo courtesy of Wadsworth Center)

Researchers from several VA medical centers conducted home testing of a brain-computer interface for patients with amyotrophic lateral sclerosis (ALS), with mixed results. The system, designed mostly to aid with communication, was reliable and useful for home use. However, a majority of patients were not able to use the system because of disease progression or death. The results show that this technology may be better-suited to people who are severely disabled but otherwise in more stable health, according to the researchers.

Dr. Richard Bedlack of the Durham VA Medical Center, co-author on the study, explained the significance of the findings: “One of the toughest things about ALS is losing the ability to communicate. Our study clearly showed that the Wadsworth BCI can preserve accurate communication even in advanced stages of this disease. Not surprisingly, patients with more stable health were more likely to use the technology than those whose health was changing.”

"One of the toughest things about ALS is losing the ability to communicate. Our study clearly showed that the Wadsworth BCI can preserve accurate communication even in advanced stages of this disease."

The results were published in the June 27, 2018, issue of Neurology.

ALS, also called Lou Gehrig's disease, is a degenerative disease. It causes the death of neurons that control muscles. There is currently no cure for ALS. As the disease progresses, patients often lose the ability to communicate as control over muscles weakens. In later stages of ALS, patients may be put on a ventilator because of difficulty breathing, which makes communication even harder.

Various devices have been invented to allow people with ALS or other debilitating conditions to communicate. One common type tracks eye movement as patients look at a screen, allowing them to type out words. Another type, brain-computer interfaces, enables people to interact with the world directly through brain signals rather than muscle movements.

For this study, the researchers tested one such brain-computer interface, the Wadsworth home system. The system was developed by the Wadsworth Center, a research laboratory run by the New York State Department of Health. 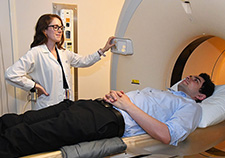 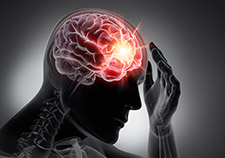 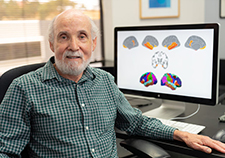 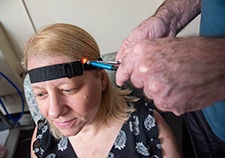 Here's how it works. The user wears an EEG (electroencephalogram) cap, which holds several electrodes. The electrodes measure electrical brain activity, and the brain signals control a computer interface. The interface is made up of a 72-item matrix, including letters, numbers, and program functions. The user pays attention to the desired item in a group of five or six items, which flash rapidly on the screen. In this way, the computer can calibrate what brain signals correspond to which selections.

Watch this 2008 60 Minutes video to see the system in action.

To help with communication, the interface converts thought input to words, which can be print writing, computerized speech, or email. Predictive spelling helps speed up the process. The interface also includes an internet news reader, as well as audio and video content such as audio books and YouTube.

Bedlack believes that this new technology can be of great service to Veterans and others with ALS. “It was especially wonderful to be able to offer this exciting technology to Veterans, who are twice as likely to get ALS compared to non-Veterans. This is another example of the many great options the [VA medical center] provides to Veterans with ALS,” he said.

Many studies have been published on brain-computer interfaces, but very few involved use outside of a research setting. For the Neurology study, the researchers wanted to see how well the Wadsworth system worked when patients used it independently, without a technician on hand.

They enrolled patients with ALS from five VA medical centers. Both patients and their caregivers were trained on the system over two to six home visits, lasting one to two hours each. After training, patients used the system for 12 to 18 months. The computer sent usage data to the researcher over the internet, and they made home visits every three months for an interview and to address any issues.

For patients that completed the study, the Wadsworth system functioned reliably and stably. Technical problems were rare, and were handled quickly. The system was in good working order 98 percent of the time. Patients had a spelling accuracy with the device of 73 percent. This number is lower than how accurately they were able to spell out words in an assessment with a technician before home use, but is still considered good performance.

Patients and caregivers who completed the trial said that the benefits of the system outweighed the burden of its use. Patients' quality of life also remained stable throughout the study. Of the eight patients who finished the trial period, seven elected to keep using the device on their own.

Although the system functioned well technically in home use, the researchers did run into some barriers to the potential of this technology for patients with ALS. Most of those barriers stemmed from the nature of ALS itself.

Of the 39 patients who met the inclusion criteria for the study, only 14 completed the training and used the device independently. The majority who left the study did so because of death or rapid disease progression. Of the 14 who completed training, two died before the study ended and four withdrew because of illness or loss of their caretaker.

The researchers concluded that this type of brain-computer interface is most appropriate for people who are severely disabled but otherwise in stable long-term health. Patients who can commit time and effort into mastery of the system are most successful. Because ALS is a progressive disease that causes many different health problems, mastering the Wadsworth brain-computer interface could be difficult. The system presently may be more appropriate for patients with conditions such as cerebral palsy, brainstem stroke, or high-level spinal cord injury, say the researchers.

Improving the convenience and performance should increase the number of patients who find brain-computer interfaces useful, according to the researchers. As Bedlack explains, “In the future, BCIs will get easier to use and then will be suitable for a broader patient population. I also expect BCIs to be able to interface with more devices, thereby enabling not only communication, but also environmental controls and devices such as power wheelchairs and exoskeletons. In this way, they will further empower Veterans with ALS to maintain their independence and quality of life.”

Improvements, such as using dry electrodes that do not require conductive gel to be applied to the head, are currently underway. Because other technologies, such as eye-tracking devices, are currently faster and possibly more convenient than brain-computer interfaces, the researchers write that "BCIs that support communication are at present most suitable for people whose disabilities prevent or greatly impair their ability to use conventional devices."

The study was funded by VA's Cooperative Studies Program. The Wadsworth brain-computer interface was developed at the National Center for Adaptive Neurotechnologies at the Wadsworth Center, which is supported by the National Institutes of Health.