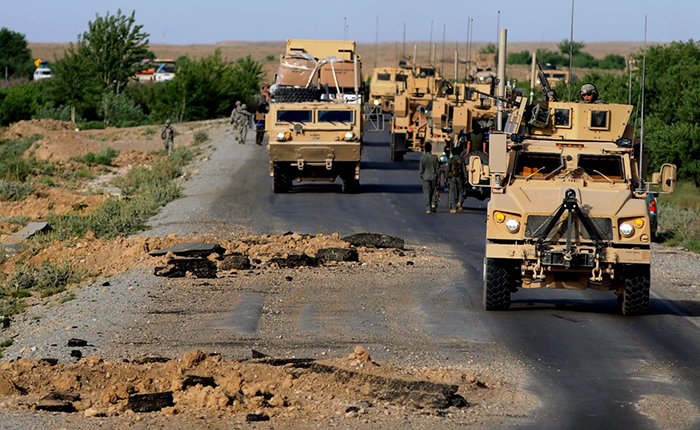 U.S. soldiers make their way around holes created by improvised explosive devices (IEDs) in Afghanistan in 2010. Understanding the long-term effects of blast injuries on the brain has been a priority for VA research. (Photo by Senior Airman Kenny Holston/USAF)

The researchers found that an enzyme called nitric oxide synthase helps control what substances make it into the brain after mild TBI by crossing the blood-brain barrier. The study focused on changes in the cerebellum after blast injury. The researchers used a drug that blocks nitric oxide synthase to test the idea that inhibiting this enzyme at the right time after TBI may help prevent blood-brain barrier disruption. 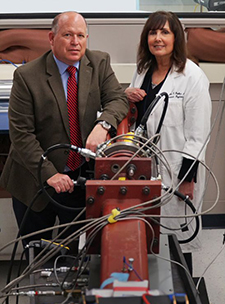 Study co-authors Drs. David Cook and Elaine Peskind, with the Puget Sound VA and University of Washington, use a device called a shock tube (shown in foreground) to simulate blasts in rodent models so they can better understand what happens in the brains of soldiers exposed to blasts. (Photo by Christopher Pacheco)

Study co-authors Drs. David Cook and Elaine Peskind, with the Puget Sound VA and University of Washington, use a device called a shock tube (shown in foreground) to simulate blasts in rodent models so they can better understand what happens in the brains of soldiers exposed to blasts. (Photo by Christopher Pacheco)

The risk of dementia later in life is more than double in Veterans with TBI, compared with those who have not had TBIs. However, why TBI increases the risk is not well-understood.

Some evidence suggests that problems with the blood-brain barrier may cause neurodegeneration. The blood-brain barrier is a tight border of cells that separates the inner parts of brain from the tiny vessels that supply blood to the central nervous system. This barrier controls which substances can cross into the brain and which ones cannot. Substances important to neural function such as water, nutrients, and glucose can easily pass through. Harmful materials such as pathogens are kept out.

Previous studies by the Puget Sound group and others have shown that mild TBI caused by blasts can disrupt blood-brain barrier function. This disruption appears to be particularly prominent in the cerebellum, a part of the brain responsible for motor control, as well as certain important cognitive functions. 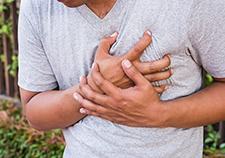 To investigate how blasts affect the blood-brain barrier, the researchers used a mouse model of mild blast TBI that is quite similar to the kind of TBI-inducing explosions many Veterans experience on the battlefield. The researchers injected a protein called albumin into the blood stream of the mice which had been labeled so they could trace whether it got into the brain. There is lots of albumin in the blood, but under normal conditions the blood-brain barrier is very tight, so only very low levels of albumin can get across.

The researchers found higher levels of labeled albumin in the cerebellum of blast-exposed mice than in control mice. This means that repetitive blast exposure disrupted blood-brain barrier function, according to the researchers. A single blast injury would not cause such a disruption, they explain. Blood-brain barrier disruption was less prominent in other parts of the brain, supporting the idea that the cerebellum is particularly vulnerable to blast injury, according to the researchers.

Previous research has shown that nitric oxide synthase is involved in blood-brain barrier disruption. In the latest research, changes in nitric oxide synthase caused by blasts increased levels of a molecule called ICAM-1. ICAM-1 helps immune cells in the blood get across the blood-brain barrier. The researchers found that blast exposure increased the number of immune cells that crossed into the brain. Once these immune cells get in, they can sometimes cause damage.

The researchers treated the blast-exposed mice with a chemical called L-NAME, which stops nitric oxide synthase from working. Mice treated with L-NAME had lower levels of ICAM-1 and fewer immune cells entering the cerebellum.

The results raise the possibility that drugs targeting the nitric oxide system may help prevent brain injury. However, such treatments would need to be precisely timed, according to Dr. David G. Cook of the VA Puget Sound Health Care System, corresponding author on the study.

The study adds to growing evidence that immune responses after TBI are associated with delayed-onset brain dysfunction. By exploring the mechanism by which the brain-blood barrier becomes compromised, researchers may be able to time treatments with drugs similar to L-NAME to prevent damage.