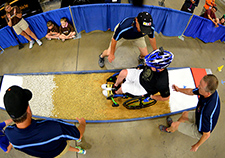 A Veteran competes in the 2015 National Veterans Wheelchair Games. Research shows that about a third of people with spinal cord injuries end up needing three or more hospitalizations during their lifetime for treatment of pressure sores. (VA photo)

A Veteran competes in the 2015 National Veterans Wheelchair Games. Research shows that about a third of people with spinal cord injuries end up needing three or more hospitalizations during their lifetime for treatment of pressure sores. (VA photo)

A team including a VA researcher pinpointed two proteins—one in the blood, the other in the urine—that appear to warn of the risk of pressure ulcers in patients with spinal cord injury. Testing for the biomarkers could help in efforts to prevent the sores, which affect about a third of SCI patients during their initial hospitalization.

The results need to be confirmed in a larger study, say the authors, with the University of Pittsburgh and the VA Pittsburgh Healthcare System.

The findings appeared online Jan. 25, 2016, in the Archives of Physical Medicine and Rehabilitation.

Pressure ulcers are a serious problem for spinal-cord-injured patients and others with limited mobility. The sores are caused by prolonged pressure on the skin. For wheelchair users, they occur most commonly on the buttocks. The ulcers form quickly and can be difficult to treat. Without prompt, effective treatment, they can turn into deep, open wounds.

Homing in on the inflammation process

Despite similar medical risk factors, some patients develop pressure ulcers while others do not. Experts think that may be due to individual differences in the inflammation process. 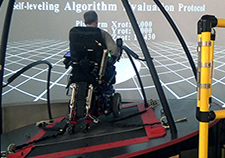 Guided by that theory, the VA-Pitt team looked for differences in the levels of certain "inflammatory mediators"—chemicals that are released from cells and help form the body's inflammation response. They tested for 23 mediators in all.

The study involved 35 patients at the University of Pittsburgh Medical Center who had been newly admitted after a spinal cord injury. The researchers took blood and urine samples from the patients within four days of their injury, and on a regular basis thereafter. Then they compared the findings between those who eventually developed ulcers and similar patients who did not.

What they found among the pressure ulcer group were increased plasma levels of a protein called IP-10, and decreased urine levels of protein called interferon-alpha. Importantly, these chemical changes were measurable several days before the patients developed their first ulcer.

The authors write, "These inflammatory mediators should be explored as possible biomarkers for identifying individuals at risk for pressure ulcer formation."

Funding for the study came mainly from the National Institute on Disability, Independent Living, and Rehabilitation Research.

VA is the nation's largest single provider of spinal cord injury care. To learn more about VA research in this area, visit www.research.va.gov/topics.