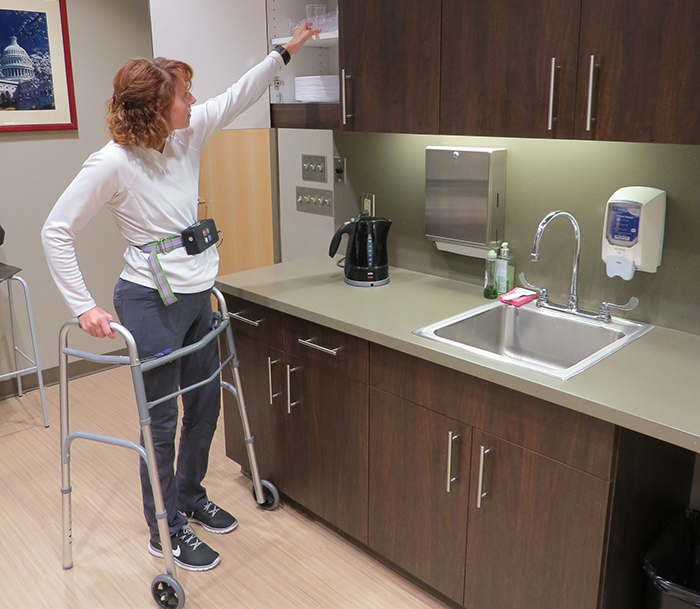 Neuroprostheses can enable people with spinal cord injury to exercise and perform many everyday tasks in and outside the house. (Photo courtesy of the APT Center) 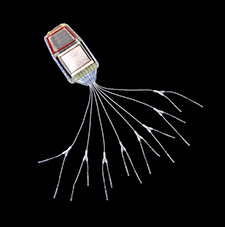 An example of an implantable pulse generator, with electrodes attached via wires. The generator is about 4 inches long.

An example of an implantable pulse generator, with electrodes attached via wires. The generator is about 4 inches long.

Neuroprostheses, implanted devices that stimulate the nerves to cause paralyzed muscles to contract, can allow people with spinal cord injuries to stand and step. But they are a fairly recent invention, and experts don’t know how well they function in the long term. A research team from the Advanced Platform Technology Center at the Louis Stokes Cleveland VA Medical Center followed up with recipients of lower-limb neuroprostheses and found that the devices were still functioning and useful years after they were first implanted.

Stephanie Nogan Bailey, corresponding author on the paper, summarizes the findings: “Technical and clinical performance was maintained over time, and continued use of the system suggests that implanted lower-extremity neuroprostheses provide lasting benefits that recipients value.”

Overall, 94 percent of the participants were satisfied with the prostheses they had received.

The results appeared in the Sept. 9, 2017, issue of Archives of Physical Medicine and Rehabilitation.

Neuroprostheses performed well on a number of tests

The study is among the first to follow up years after patients were equipped with neuroprostheses. Most tests of neuroprosthesis function are done shortly after implantation, typically within a year of surgery. Bailey explains that the new study is important because “this article reports what is potentially the largest cohort and longest follow-up interval of implanted lower-extremity neuroprostheses users” (22 participants averaging more than 6 years of home use). The long-term results were encouraging, according to the researchers.

The neuroprosthesis is made up of a pulse generator, electrodes, and a controller. It uses electrical pulses to stimulate the muscles to contract, similar to how the brain signaled the muscles before the participant’s spinal cord injury. The generator is a sealed titanium capsule covered in medical-grade silicone, similar to a pacemaker, which is implanted in the abdomen. Wires under the skin connect the generator to electrodes implanted into the leg muscles. The generator connects wirelessly to an external controller worn around the waist.

All of the participants had been part of other studies when they first received their neuroprostheses. Because different studies tested different things, the researchers did not give every participant every test. Each participant was given the same tests that he or she originally completed so that the researchers could track their progress over time.

First, the researchers tested whether the neuroprosthesis components were still working. Participants had either first-generation devices, which used an eight-channel implanted pulse generator, or a second-generation device, with a 16-channel generator. Eighty-seven percent of the eight-channel generators still functioned. Nearly all of the electrodes used with the first-generation equipment were also still functioning. Almost none of the second-generation technology had failed in the intervening years.

Nine of 13 participants could stand by themselves for one to five minutes. Four could stand for between 10 and 60 minutes. Standing for one minute is enough time to complete a standing transfer, such as from a bed to a wheelchair. Most participants were also able to support most of their body weight on their legs for several minutes while standing.

Third, the researchers tested participants on several functional tasks. Fourteen of 15 participants could stand. Five of six were able to stand and retrieve an object from a high shelf. Nine of 12 could perform a standing pivot transfer.

Being able to stand after a spinal cord injury—through the use of neuroprostheses or other methods, such as braces and standing wheelchairs—can have a variety of health benefits, explain the researchers. It improves circulation, skin integrity, and reflex activity. It can also help with bowel and bladder function, digestion, and the quality of sleep. In addition, standing with neural stimulation exercises the otherwise paralyzed muscles of the legs, helping to prevent muscle atrophy.

Studies have shown that giving people with spinal cord injury the ability to stand improves quality of life in many ways, beyond the medical benefits mentioned above. Standing allows patients to negotiate architectural barriers so that they can get to locations they might not be able to reach in a wheelchair. It can also allow them to reach objects from shelves and other high places. These changes have been shown to benefit patients psychologically as well as physically. The new results show that the participants valued these benefits, say the researchers.