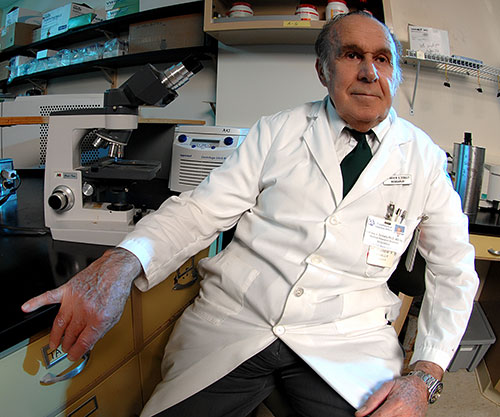 Dr. Andrew Schally of the Miami VA Medical Center is a pioneer in the understanding of endocrine signaling in the nervous system. His studies established the foundation for many research areas, including neuroendocrinology and reproductive endocrinology, and illuminated the previously unknown relationship between the hypothalamus, pituitary gland, and endocrine system.

In 1977, he won the Nobel Prize for discovering that the hypothalamus links the nervous system to the endocrine system via the pituitary gland.

For the past 20 years, Schally and his laboratory have synthesized analogs of growth hormone-release hormone (GHRH) for therapeutic use in managing various cancers. He pioneered the use of LHRH agonists to treat prostate cancer. In 2016, he found that GHRH could reduce the progression of stomach cancers in mice.

Although much of Schally's work has focused on cancer, he has made landmark contributions in other fields. In 2011, he established that GHRH is able to repair cells in the hearts of rats with acute myocardial infacts, leading to the possibility that someday humans who have had heart attacks will receive doses of this hormone to repair damage to their hearts. Schally's group continues to investigate this area, and published a follow-up article in 2017. His work with hypothalamic hormones has also led to many forms of gene therapy, such as new forms of birth control. He holds 32 U.S. patents and is an author on more than 2,400 scientific papers.