An international research team including scientists at the Miami VA Medical Center has devised a way to transplant healthy cells into the body without the usual risk of rejection. The study, published online Oct. 28 in the Proceedings of the National Academy of Sciences, involved a middle-aged man with diabetes, but it may be relevant to a range of diseases. 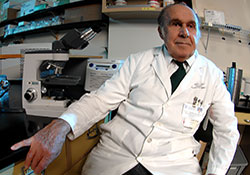 Study co-author Dr. Andrew Schally, a half-century veteran of VA research who won a Nobel Prize in the 1970s, called the results "historic."

The researchers, based in Germany, Israel, England, and the U.S., developed what amounts to an artificial pancreas. The pancreas is where the body makes insulin, the hormone that helps move sugar from the bloodstream into the body's cells, where it supplies energy. In type 1 diabetes, an autoimmune disease, the body kills off the pancreas' insulin-producing beta cells.

The Israeli scientists developed a biocompatible chamber that encloses clusters of beta cells, called islets, in their own oxygen-rich environment. The cells are packed in a gel that shields them from attack by the host immune system, and the whole assembly is housed in a biocompatible plastic shell. The chamber, about 2.5 inches in diameter and a half inch thick, is surgically implanted and linked to ports that the patient himself can use to inject in fresh oxygen, at least until new blood vessels develop around the graft.

The Miami VA team, including Schally and Dr. Norman Block, played a key role in the development and animal testing of the system. They showed that compounds that mimic growth hormone-releasing hormone (GHRH) could boost the viability of transplanted beta cells and their ability to make insulin. This means a graft would need fewer functioning beta cells to be effective.

The compounds are not yet approved for human use, but their effectiveness in animal experiments helped spur the Miami group's Israeli and German colleagues to pursue the idea of an implantable pancreas.

The 63-year-old patient who took part in the new study was followed for 10 months, after which time the artificial pancreas was removed. The graft had remained healthy, with the transplanted beta cells pumping out insulin. His blood sugar levels showed only small improvements, though. The researchers said having more islets available to transplant—or treating the cells with one of the compounds from Schally's lab—could have yielded even better results.

Importantly, the patient tolerated the transplant well without taking drugs to suppress the immune system. The drugs often entail major adverse side effects and have limited the use of medical transplants until now.

Lead author Dr. Barbara Ludwig and her group, based in Dresden, Germany, say the new system could be a realistic treatment option for type 1 diabetes patients within a few years.

Block points out that the therapy could potentially also help those with type 2 diabetes—namely those with more severe forms of the disease, who rely on daily insulin shots. About one in five VA patients has type 2 diabetes.

Human beta cells for transplantation are hard to come by, but research has shown that cells from pigs are a good alternative. Block says the new study shows that transplanted cells can be protected from attack by the immune system, and the approach, in theory, should work as well with pig cells as with human cells. That may expand how many patients could potentially benefit from the procedure.

He adds that the new transplant method could also potentially apply to a variety of other serious health conditions.

"Other diseases that could be helped by individual cells or groups of cells, as opposed to organ transplants, could well benefit from this technology," says Block, a former VA cancer surgeon and current clinical director of the Endocrine Polypeptide and Cancer Institute at the Miami VA, where Schally has led research on diabetes, cancer, and other diseases since relocating from New Orleans in the wake of Hurricane Katrina in 2005.