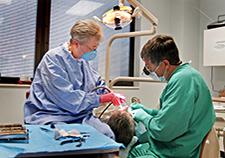 It's no news that appropriate use of fluoride prevents cavities. What is news is that 8 in 10 VA dental clinics are now meeting a high standard for ensuring that those Veterans at highest risk for tooth decay are getting preventive fluoride treatment. The group includes many poor and minority Veterans, and many with multiple medical problems. Thanks to the new initiative, their fluoride use is up, and their need for new fillings is down.

A study of the impact of a VA-wide fluoride performance measure was published in May in the Journal of the American Dental Association.

"Our findings show this program has had a very substantial positive impact," says lead author Dr. Gretchen Gibson, who directs the VA Oral Health Quality Group, part of the national Office of Dentistry. Based in Arkansas, she also works as a dentist at the Fayetteville VA Medical Center.

Goal was to reach 90 percent of target patients

The performance measure went into effect in fiscal 2009. It calls for all VA dental clinics to identify Veterans at highest risk for cavities—namely, those who have already had two or more fillings in a year's time. The goal is to boost the percentage of these Veterans who get a fluoride application. It could be a varnish during a dental visit, or a prescription paste or gel to be applied at home.

While regular fluoride toothpaste is helpful in preventing cavities, the treatments given or prescribed by dentists have a higher concentration of the enamel-protecting mineral.

In the first year, the performance measure required clinics to meet the goal of providing fluoride to at least 60 percent of high-risk patients. The target rose gradually to 90 percent by fiscal 2012.

To lay the groundwork for clinics to ramp up their efforts, the national VA dental program offered increased education to VA's more than 800 dentists and more than 300 dental hygienists. A research team reviewed the literature on fluoride use and shared the results. All the providers were invited to webinars, and every clinic received educational posters.

The study of the performance measure's effect found that 81 percent of VA dental clinics met the goal in 2012. In other words, 8 in 10 clinics gave preventive fluoride to at least 90 percent of their high-risk patients.

Another facet of the findings: Fluoride use for high-risk patients rose from around 52 percent to 94 percent between 2008 and 2012.

Most important, this all translated into a reduced need for new fillings, both for the target high-risk population and VA dental patients in general. The impact was modest but significant, say the study authors. Among the high-risk Veterans, there was nearly a 10-point drop in the rate of new fillings. Before the performance measure launched in 2009, the percentage of high-risk VA dental patients needing new fillings had been on the rise.

Gibson points out that because system-wide performance measures in VA are driven by computerized data, there was a need to identify the high-risk patients based on information in their medical records—specifically, their history of cavities and fillings. But she says it appears from the study's findings that a wider cross section of patients benefited from the fluoride initiative.

"It has been our mantra to the field throughout this process that we catch the obvious patients with the performance measure, but it is also a trigger to make providers more aware of everyone who might benefit from extra fluoride," says Gibson.

"Part of our success may stem from just an increased awareness of prevention overall. This might help explain the drop in needed restorations [fillings] for all patients, and not just those deemed high-risk by the computer data."

Gibson and her coauthors say further research can home in on what type of fluoride treatments work best for which patients, and how often they should be applied.