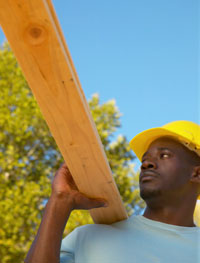 Lori Davis, MD, a physician at the Tuscaloosa VA Medical Center, likes to tell the story of a Veteran with posttraumatic stress disorder who had once managed his own construction company. He fell on hard times and had to give up the business. Through a VA program, he found a job at a home and garden center doing something he loved—helping customers with plants and garden supplies. He did so well, the manager wanted to make him supervisor of the department.

That's when his PTSD almost became an issue. Supervising others caused him stress. It led to conflicts. To make matters worse, "He saw it as a weakness on his part that he did not want to accept the promotion," says Davis.

The VA employment specialist stepped in—the same counselor who had helped the Veteran identify his passion for working with plants and developed the garden-center job for him. "They both went to talk to the employer," recounts Davis. "It was the specialist who helped the employer see that this Veteran really liked his job and wanted to stay at the same level, and that his reluctance to accept the supervisory role shouldn't be seen as an avoidance of responsibility. So they maintained him at that level, and he thrived."

The anecdote illustrates the success of a supported-employment model called "individual placement and support," or IPS. A recent VA study, published online this month in Psychiatric Services, compared the model to the standard vocational rehabilitation program (VRP) that VA offers.

The study included 85 Veterans, ages 19 to 60, all with moderate to severe PTSD. Many also had conditions such as depression and addictions. Some had mild to moderate traumatic brain injury. Many of the men and women had been unemployed for a stretch-on average, about 19 months.

After a year of follow-up, 76 percent in the IPS group had gained competitive employment, compared with only 28 percent among the VRP clients. On average, those assigned to IPS had worked more weeks and made more money than the Veterans in VRP.

How the two employment programs differ

In VRP, Veterans work in sheltered, temporary jobs, usually entry-level. The idea is to provide or reinforce basic work skills and habits. This stage is usually followed by a short-term transitional job located within a VA medical center or in the community, but that's typically where the program ends. For those with PTSD, the program has generally not resulted in competitive, long-term employment.

IPS is more person-centered, starting with an in-depth interview to explore the Veteran's interests and aspirations. "It meets each Veteran's individual needs and desires rather than putting them in set-aside jobs that do not have any relevance to their work goals," says Davis.

The model relies heavily on individualized job development by IPS employment specialists, who spend most of their time in the community, networking and developing job possibilities geared to their clients' interests and backgrounds. The job coaching and other follow-up is more intensive in the first few months; it then tapers off as the Veteran gets stabilized in the work setting. Job development continues even once the Veteran is placed, as "the first job is often not the best job," notes Davis. "We want the Veteran to be in a situation where he or she feels motivated to continue."

Davis points to another key difference: "There's a strong integration of the IPS specialist with the PTSD treatment team, rather than the silo treatment model of conventional VRP." The IPS specialist visits the Veteran at least weekly in the workplace and reports back to the mental health treatment team on any issues that need attention.

Davis explains how this interaction typically plays out: "The medications might not have been particularly bothersome while the Veteran was at home, but in the workplace he finds he can't tolerate some of the sedation. So the meds have to be changed due to the demands of the work environment. Or, the Veteran could be feeling more anxious, and the medication-or counseling—could change based on that."

VRP, with its highly structured approach, has its proponents within VA, but IPS has been gaining popularity. Past studies on IPS, however, have focused on Veterans with severe mental illness—namely schizophrenia and bipolar disorder—and largely excluded those with PTSD. The IPS study published this month is the first to be conducted exclusively in Veterans with PTSD. Davis and others say they are now committed to building the evidence base showing the effectiveness of IPS for this population.

Her team is now planning a multisite trial—another comparison between IPS and VRP. "We want to have 10 or 15 VA sites, and several hundred Veterans. We want urban and rural Veterans, and all the other aspects of diversity that come with a larger trial. We want this to be the definitive trial to build the evidence base for IPS as an effective employment model for those with PTSD."

And what do employers get out of hiring Veterans through the program? Under a new law passed in November 2011, the "Returning Heroes Tax Credit," businesses receive tax credits for hiring unemployed Veterans. But these incentives didn't figure in the VA study, which ended about a year ago. Says Davis: "There was a lot of support from employers, many of whom were Veterans themselves. The employers appreciate IPS because it's almost like a built-in employee-assistance program. They feel reassured in taking the chance on a Veteran with PTSD or another disability because they know they have the support."