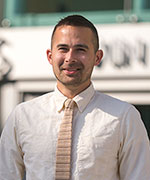 The Lesbian, Gay, Bisexual, and Transgender Health Program in the VA Office of Patient Care Services has awarded an I CARE certificate of excellence to Dr. John Blosnich, a VA health services researcher. The award recognizes his outstanding work in support of excellence in health care and ancillary services for LGBT Veterans.

"The goal of the I CARE Award for LGBT Veteran Services is to publicly acknowledge the innovative programs, outstanding clinical services, and community outreach which improves access to and quality of services for LGBT Veterans," said Dr. Alexis Matza, program coordinator for LGBT Veterans Services.

Blosnich is a health services researcher at the Center for Health Equity Research and Promotion (CHERP) at the VA Pittsburgh Healthcare System. He is also an assistant professor at the University of Pittsburgh. His research focuses on issues that affect LGBT Veterans, such as interpersonal and self-directed violence and suicide prevention. He is the recipient of a five-year Health Services Research and Development Career Development Award—the first of its kind to examine transgender health issues within the VA health system.

One recent example of Blosnich’s work is a study published in May 2018 in the American Journal of Preventive Medicine. Blosnich and colleagues examined the relationship between spirituality and suicidal ideation and attempts in people who were part of a sexual minority group. Researchers used data from the 2011 University of Texas at Austin's Research Consortium, which surveyed over 21,000 college-enrolled young adults who reported their sexual identity as heterosexual, gay/lesbian, bisexual, or questioning. The study found that the more important religion was to gay/lesbian, bisexual, or questioning students, the higher the odds that they had experienced thoughts of suicide. The researchers concluded that religion-based services for mental health and suicide prevention might not benefit this group of people. They advised religious-based providers to stress their commitment to welcoming sexual minority individuals.

VA has established five values that help define its mission to "care for those who have borne the battle." They are Integrity, Commitment, Advocacy, Respect, and Excellence. In sum, they are referred to as I CARE. To recognize VA employees who exemplify I CARE, VA established the I CARE Honor Award. Recipients are nominated by their peers—other employees in the VA system.