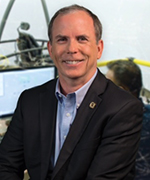 VA researcher Dr. Rory A. Cooper has been named a 2017 Fellow of the American Association for the Advancement of Science in the discipline of engineering. Cooper was singled out for his "distinguished contributions to the field of bioengineering and health and rehabilitation sciences, particularly for applications for people with disabilities," according to the AAAS.

Cooper, himself a wheelchair user, is founder and director of the Human Engineering Research Laboratories, a collaboration between the VA Pittsburgh Healthcare System and the University of Pittsburgh. Over several decades he has been instrumental in developing novel innovations in wheelchair design. He and his team at HERL hold 25 patents related to wheelchair design and assistive technologies.

Cooper's inventions are being used by more than a quarter million individuals with disabilities, according to Dr. Brad Dicianno, chief operating officer and medical director for HERL. The innovations range from using newer, lighter materials that make wheelchairs easier to maneuver to robotic extensions that can reach objects for the wheelchair's user.

This year, 396 AAAS members were named fellows through a process that involves nomination by colleagues within the association. The newly elected fellows will be presented with an official certificate and rosette pin at the AAAS 2018 annual meeting in Austin, Texas, on Feb. 17.