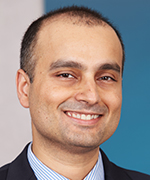 Dr. Jasmohan Bajaj, a researcher at the Hunter Holmes McGuire VA Medical Center in Richmond, Virginia, has been elected to become a fellow of the Royal College of Physicians of London (FRCP). It is a singular honor, as very few international physicians who have not received training in the United Kingdom are nominated to become fellows. More often, a physician from the UK becomes a member of the RCP and then is selected to become a fellow via one of three routes: nomination, criteria, or self-declaration.

According to the RCP, "fellowship of the Royal College of Physicians of London is an accolade held by some of the most exceptional and innovative physicians in the world. It is a mark of [a physician's] achievement and skill as a doctor, and recognizes his or her ongoing contribution to the profession."

Bajaj, who is also an associate professor of medicine and transplant hepatologist for the division of gastroenterology, hepatology, and nutrition at Virginia Commonwealth University, was nominated to the RCP on the basis of his research. He has conducted numerous clinical trials in the areas of hepatic encephalopathy, chronic liver disease, and the microbiome, among others. His work has been funded by the National Institutes of Health, VA, and the American College of Gastroenterology.

Bajaj frequently presents his work on hepatic encephalopathy and chronic liver disease nationally and internationally at meetings, grand rounds, and symposia. He is the chairperson for the North American Consortium for Study of End-stage Liver Disease and president of the International Society for Hepatic Encephalopathy and Nitrogen Metabolism.

Founded in 1518 by a Royal Charter from King Henry VIII, the Royal College of Physicians of London is the oldest medical college in England. It plays a pivotal role in raising medical standards and shaping public health policy worldwide. The RCP strives to develop evidence-based policy, champion medical leadership, and drive improvements in clinical practice.

There are three RCP fellowship cycles in each year. Dr. Bajaj will be honored at the RCP graduation ceremony for new fellows on July 25, 2017, in London.