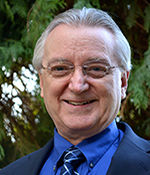 James Henry, Ph.D., an audiology researcher widely known for his innovative work on treating and managing tinnitus, is the recipient of the 2016 Paul B. Magnuson Award, the highest honor given to investigators by VA's Rehabilitation Research and Development Service (RR&D).

Henry's work is credited with helping large numbers of Veterans and service members. The approach he developed, called Progressive Tinnitus Management, continues to be adopted nationwide in both VA and Defense audiology clinics.

"Patients have often been told to go home and learn to live with [their tinnitus], nothing can be done—and it's not really true," says Henry.

Henry is a research career scientist at the RR&D National Center for Rehabilitative Auditory Research, based at the VA Portland Health Care System. He is also on the faculty at Oregon Health and Science University and Portland State University.

Tinnitus and hearing loss are the top disabilities among Veterans. As of 2013, more than 1.1 million Veterans had a service-connected disability rating for tinnitus. Veterans are at higher risk than the general population because of their exposure to loud noise.

Those with the disorder perceive ringing, buzzing, whistling, or other sounds in their ears. Each person can hear something a bit different. The condition can disrupt sleep, affect a person's work and social life, and sharply increase the risk of depression or anxiety. In short, in more severe cases, it can potentially be debilitating.

Henry joined the Portland VA in 1987. Beginning in the 1990s, he pioneered a stepwise approach to tinnitus care that involves five levels. The majority of patients need only basic education on how to manage the condition. As the levels progress, therapy gets more intensive and long-term.

Henry's model stresses careful individualized assessment to determine a person's needs. In fact, he developed the Tinnitus Functional Index and the Tinnitus and Hearing Survey, two important tools clinicians now use to assess whether the condition is present, how severe it is, and how it is responding to treatment.

Patients needing higher levels of care might use sound generators, or hearing aids with built-in sound generators, or other approaches such as tinnitus masking or cognitive behavioral therapy. Patients at various levels might benefit from guided imagery, deep breathing, or other relaxation exercises, or simply more engagement in pleasant pastimes they enjoy.

Henry has led a number of rigorous clinical trials testing the overall approach, or specific components of it. Two of the studies involved Veterans with traumatic brain injury. Research has also shown that Henry's method can be successfully delivered via telephone sessions, making it especially valuable for Veterans with tinnitus who live in rural areas.

In 2009, Henry and his team published a user-friendly 126-page manual called How to Manage Your Tinnitus: A Step-by-Step Workbook.

The dedication to the book, now used widely in VA clinics and by patients at home, reads: "This book is dedicated to our nation's military Veterans. We thank you for serving our country. You are the reason we enjoy freedom."

Established in 1998 by VA Rehabilitation Research and Development, the Magnuson Award consists of a plaque, a one-time award of $5,000, and $50,000 per year for up to three years to supplement ongoing peer-reviewed research. The award honors the life and legacy of Paul B. Magnuson, M.D., a bone and joint surgeon who spearheaded the expansion of VA research after World War II. He was known for his dedication in finding new treatments and devices to help Veterans cope with disabilities.