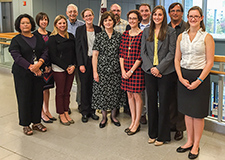 A group at the VA Boston Health Care System was instrumental in conducting a large multisite VA trial on rheumatoid arthritis that has been recognized by the National Arthritis Foundation for its impact on care. (Photo by Derrick Morin)

A group at the VA Boston Health Care System was instrumental in conducting a large multisite VA trial on rheumatoid arthritis that has been recognized by the National Arthritis Foundation for its impact on care. (Photo by Derrick Morin)

The National Arthritis Foundation awarded its 2014 Lee C. Howley Sr. Prize for Arthritis Research to the team of investigators who published a study last year titled "Therapies for Active Rheumatoid Arthritis after Methotrexate Failure" in the New England Journal of Medicine.

The foundation gives the prestigious award each year to a study team who have "significantly advanced understanding, treatment or prevention of arthritis and related disease," and whose work "will lead to a faster cure."

The study was funded by VA's Cooperative Studies Program and conducted in partnership with the U.S. National Institutes of Health and its Canadian counterpart, the Canadian Institutes for Health Research.

The trial involved 353 patients with rheumatoid arthritis, all of whom had not responded adequately to a common first-line treatment for the disease, methotrexate (sold as Rheumatrex or Trexall).

The drug is considered a "disease-modifying anti-rheumatic drug" (DMARD) because it not only eases pain and swelling, but can also decrease actual joint damage and slow disease progression.

The study compared two follow-up therapies for these patients, both involving methotrexate plus other medications.

The findings suggest that first a relatively inexpensive triple therapy should be tried, consisting of methotrexate plus two other DMARDS: sulfasalazine and hydroxychloroquine. For patients who don't get enough help this way, the authors recommend switching to a more costly regimen consisting of methotrexate plus etanercept (sold as Enbrel, Amgen), an injectable drug that belongs to a class of agents known as "biologic response modifiers," or simply "biologics." These drugs are genetically engineered proteins that disrupt the body's inflammation process.

Importantly, the study showed that the less costly triple therapy can do the job for many patients, without the need for the more expensive "biologic" treatment.

The authors wrote, "Our findings suggest that a strategy of first administering triple therapy, with a switch to etanercept-methotrexate in patients who do not have an adequate response to triple therapy, will allow a substantial percentage of patients to be treated in a more cost-effective way without adversely affecting the clinical outcomes."

The study was coordinated through the Cooperative Studies Program Coordinating Center at the VA Boston Health Care System. Staff here substantially contributed to the design, execution and analysis of the trial, which took place at 16 VA medical centers, along with other sites in the U.S. and Canada.

Experts in the field praised the research. Dr. David Wofsy, of the University of California, San Francisco, said the trial "was a true tour de force of investigator-initiated collaborative research that provided critically important insights into one of the most important clinical challenges in the field of rheumatology."

The study findings were also cited as an important clinical advance at the 2013 Annual Scientific Meeting of the American College of Rheumatology and given special mention in the recent Annals of Internal Medicine "Update in Rheumatology."