Replacement fingers for men and women 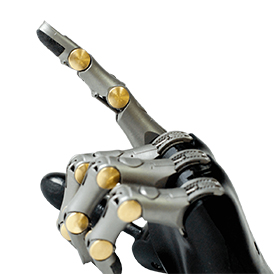 Approximately 40,000 Americans have lost part of their arms above the wrist. However, there are around 500,000 who have lost one or more fingers, 110,000 of whom are women by best estimates. While there are many prostheses available for people without hands, far fewer exist for people with finger loss.

Researchers at the VA Eastern Colorado Health Care System and the University of Colorado have developed a prosthesis to improve the independence of patients who have lost one or more fingers, except the thumb. They’ve also designed a prosthesis for those who have lost only part of a finger. Both prostheses were developed using a 3D printer provided by VA and using funds supplied by VA’s Office of Rehabilitation Research and Development.

The finger replacement, now sold as the Point Digit by a company called Point Design, LLC, is made from 3D-printed titanium with semi-hollow construction, allowing the fingers to be strong while not being heavy. The prosthetic digits can be bent and locked into one of 11 different positions through a unique ratcheting mechanism and linkage bars developed by the researchers. They return to a fully extended position at the touch of a button or by fully flexing the digit, which engages an auto spring-back feature.

Veterans and others using the prosthesis can work cell phones with touch screens, drive nails and do other tasks involving manual labor, and more easily perform activities of daily living including carrying objects with handles and tying their shoelaces. The Point Partial finger for those who still retain parts of their digits, which Point Design also manufactures, makes it easier to use hands for a wide range of activities.

The full fingers currently come in six different sizes. At a 2020 conference hosted by the Institute of Biomedical Engineering, the research team submitted a paper unveiling a smaller version of the Point Digit suitable for smaller women and for children as young as five years old. The team hopes to conduct a study in the near future on the usefulness of the smaller hand by giving it to users to take home and test.