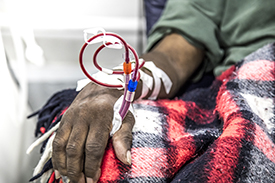 According to the National Institutes of Health, more than 661,000 Americans live with kidney failure. Of those, 468,000 are on dialysis, and the remainder have had successful kidney transplants. The way the dialysis procedure is done today owes much to the work of Dr. James E. Cimino, a VA nephrologist. In the 1960s, Cimino and his team developed a technique of using artificial arteriovenous (AV) fistulae to remove blood from the body and to return the blood once it had been filtered.

Dialysis is the process of removing excess water, solutes, and toxins from the blood in people whose kidneys can no longer perform these functions naturally. In dialysis, a machine filters blood through a dialyzer, also known as an artificial kidney, in which blood is cleaned by removing waste products and balancing electrolytes.

For more than two decades after the first dialysis was performed in 1943, the process had an Achilles’ heel: every time a patient was hooked up to a dialyzer, an artery and a vein were damaged. Patients could only receive about half a dozen treatments before doctors would run out of places to connect a blood vessel to the machine. The technique was only used when patients’ kidneys were failing and they were at imminent risk of death.

Cimino, an Air Force Veteran, came to the James J. Peters VA Medical Center in the Bronx in 1960. He started a dialysis clinic there believing such a clinic should treat not only critical cases, but also those with chronic kidney disease who needed their blood cleaned regularly. To accomplish this, he and his team first used a surgically implanted shunt, developed by another physician, which was left in place between treatments. But the shunts only lasted a few months before they were dislodged and patients developed difficulties with clotting, skin necrosis, bleeding, and infection.

Cimino and his colleagues, Drs. Michael Brescia and Kenneth Appel, then hit upon the idea of creating AV fistulae as an alternative. AV fistulae are connections made between an artery and a vein that create an access point for the dialysis machine. They are typically created in the arm or the wrist. A surgical procedure is required to stitch two vessels together to create the fistula, and the access point must be durable enough to withstand dialysis treatment several times a week without collapsing.

Some of the earliest fistulae had been created in the 1930s at the Mayo Clinic to promote blood circulation in children with polio. However, most fistulae were caused by trauma, and were considered hazardous because they increased the risk of heart failure.

According to Cimino, “we were bold in using a procedure that had always been considered physiologically abnormal—but without adequate vascular access, our patients were doomed.” The team experimented with the procedure in the early 1960s. They learned how to maintain adequate blood flow by using carefully placed tourniquets, and found their patients’ heart functions either remained stable or improved.

In April 1966, Cimino presented the results of his work with 14 patients to the American Society for Artificial Internal Organs. An article on the technique was published in the New England Journal of Medicine, and by 1968 the method was widely accepted and used throughout the world. While the technique has been refined over the past 50 years, Brescia-Cimino AV fistulae are still considered the longest-lasting and best type of dialysis access available today.

In 2006, Cimino, who died in 2010, told a reporter he had “no idea” his technique would continue to be popular so many years later. He was proud of his accomplishment: “We’re not just keeping (dialysis patients) alive,” he said. “The fact that we don’t think of people on dialysis as being terminally ill speaks to the fact that a great deal of progress has been made.”