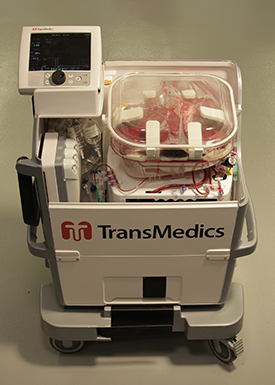 The image shows a donor liver being kept viable for transplant with a device developed in part by VA researchers. (Photo courtesy of TransMedics)

VA researchers and colleagues invented technology that will increase the number and effectiveness of organ transplants. Working with the company TransMedics, Inc., VA researchers developed a technique called "warm perfusion," which keeps donor hearts and other organs alive using an artificial circulatory system, until they can be transplanted.

The donor organ is connected to a warm perfusion device that pumps a continuous supply of oxygenated blood and electrolytes, while the organ is outside the human body. The device also maintains temperature and pressure within the organ. The technique was patented by VA and licensed to TransMedics, which developed the technology.

TransMedics makes warm perfusion machines for heart, lung, and liver transplants. The heart and lung machines are approved for use in the United States by the Food and Drug Administration, while the liver machine is currently in clinical trials.

In a U.S. first, Duke University surgeons in 2019 used warm perfusion to revive a heart and transplant it into a patient. The transplant recipient was a U.S. Veteran who received the heart through the MISSION Act. The procedure was first performed in the United Kingdom in 2015. Warm perfusion has now been used multiple times in Australia and parts of Europe.

Many transplant organs come from organ donors who are declared brain-dead. Once family consent is obtained, machinery is used to keep the donor's heart pumping, by oxygenating the blood. After an organ is surgically harvested, it is typically placed into cold storage until it can be transplanted into a host. However, organs deteriorate rapidly on cold storage. Without this new technology, donor tissues are only viable outside the body from six to 30 hours, depending on the type of organ. Warm perfusion extends this time from six hours to 12 hours for donor hearts.