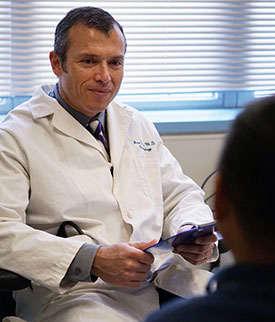 Growth hormone is a protein made by the pituitary gland and released in the blood. Even after adults stop growing, they still need growth hormone. Growth hormone plays a role in healthy muscle; the way our bodies collect fat, especially stomach fat; the ratio of high- to low-density lipoproteins in cholesterol levels; and bone density. The protein is also needed for normal brain function. Those who do not have sufficient levels of growth hormone in their bodies are said to have adult growth hormone deficiency (AGHD).

A team led by researchers at the VA Puget Sound Health Care System conducted a clinical trial, published in 2018, of an oral drug that offers a fast, simple, and convenient way to test if a patient has AGHD. Based on the results of the clinical trial, the U.S. Food and Drug Administration has approved the use of that drug, called Macrilen (macimorelin). Macrilen was able to correctly identify people with AGHD 87 percent of the time and identified those without the disease 98 percent of the time.

The availability of the test will make AGHD diagnosis easier for clinicians and will lead to more patients being tested and eventually treated for AGHD. The disease affects about 60,000 adults in the United States and Canada, including many Veterans.

The main cause of adult GHD is believed to by hypothalamic or pituitary lesions, which are growths on the pituitary gland. Studies of traumatic brain injury (TBI), a common injury in Veterans returning from Iraq and Afghanistan, have found evidence of chronic hypopituitarism (deficient hormone production by the pituitary glands), including growth hormone deficiency. A 2012 study led by Puget Sound VA researchers found that 11 of 26 Veterans participating in the study, all of whom served in Iraq and Afghanistan and had a history of mild TBI, showed abnormal hormone levels. However, it is unclear whether growth hormone replacement treatment would be effective in treating the symptoms of mild TBI.

The Puget sound research team is now studying other possible uses for Macrilen and for drugs in the same family.

Based on VA research results, the FDA approved the drug Macrilen to diagnose adult growth hormone deficiency. The condition affects about 60,000 adults in the U.S. and Canada.