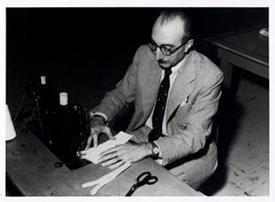 Dr. Michael DeBakey fashions the first artificial arteries at a sewing machine out of Dacron. Courtesy of the Baylor College of Medicine Archives.

Dr. Michael E. DeBakey, known as “the father of vascular surgery,” was associated with the Department of Veterans Affairs from 1949 until his death in 2008 at the age of 99. Among his many accomplishments was creating a prosthetic graft to fix weakened arteries out of a widely available synthetic material called Dacron. He implanted Dacron into a patient at the Houston VA Medical Center (a facility that now proudly bears his name) for the first time in 1954.

As a young physician, DeBakey specialized in the study of aortic aneurysms, balloon-like bulges in the aorta (the large artery that carries blood from the heart through the chest and torso) that can weaken and rupture, causing massive internal bleeding and often resulting in death.

His research led him to develop methods of repairing diseased or clot-obstructed blood vessels by using replacements of preserved human blood vessels—and later, of artificial blood vessels composed of synthetic materials. In 1952, he successfully grafted an artery from a cadaver to repair an aneurysm in a living person. In 1954, he tried Dacron instead—almost by accident.

“When I decided to experiment with material for arterial grafts,” he wrote many years later, “I went to a department store in Houston to get some Nylon. The clerk informed me that they were out of Nylon, but had a new fabric called Dacron.” DeBakey bought a yard of the material and used his mother’s sewing machine to create his first arterial patches.

Dacron proved to be a useful and long-lasting material for this purpose. A colleague of his was able to get some Nylon, but found that when he implanted it into a patient the material disintegrated in the body. “Obviously, because of my good fortune, I was ahead of everyone else in the field,” DeBakey wrote.

After implanting the Dacron graft at the VA hospital in Houston, DeBakey went on to complete more than 60,000 cardiovascular surgeries. For his work on the Dacron graft, he received the Lasker Award for Clinical Medical Research for 1963. The award, second only to the Nobel Prize in prestige for medical researchers, was renamed the Lasker-DeBakey award after DeBakey’s death.

The Dacron graft is still widely used today. It was used on DeBakey himself when he developed an aortic aneurysm in 2005. Besides the Lasker Award and the renaming of the Houston VA Medical Center, DeBakey earned many other awards in his career, including the Presidential Medal of Freedom and the National Medal of Science.

“Dr. DeBakey loved this nation and had deep respect and gratitude for the men and women who have defended her. Throughout his life, this was evident in his thoughts, words and deeds,” said Edgar L. Tucker, a former director at Houston. “VA is a richer organization because of him.”