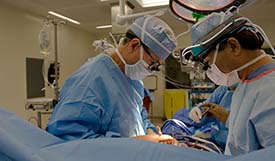 An important VA study on coronary artery bypass graft surgery that was first published in 2009, with long-term follow-up reports in 2017 and 2022, has been highlighted as one of the highest-impact in the field. In 2019, editors at the Journal of Cardiac Surgery ranked the VA trial eighth out of 11,500 original research papers on cardiac surgery. The study has influenced surgical practice in the use of “on-pump” over “off-pump” surgery.

In bypass surgery for blocked arteries, doctors take a healthy piece of vein from elsewhere in the body and sew it in place as a “detour” between the heart and a point in the problem artery below the blockage. As long as the graft remains open, the heart enjoys a renewed flow of blood and oxygen.

Conventional on-pump surgery, which has been around for decades, uses a pump that takes over the job of the heart and allows doctors to stop the organ, making it easier to operate. Another method, which has enjoyed increased interest since the mid-1990s, is off-pump surgery. It avoids the pump but can be a trickier procedure.

In the 2009 study, VA researchers studied one-year outcomes for more than 2,000 Veterans at 18 VA medical centers who underwent bypass surgery. The results showed that on-pump surgery was safer and somewhat more effective than off-pump. Importantly, the study found no evidence that the pump method affected a patient’s cognitive abilities. Some previous research had suggested that on-pump surgery could increase the risk of cognitive damage.

While off-pump surgeries reached a peak in 2002, accounting for 23% of all bypass surgeries, they began to decline in popularity more recently. By 2016, only 13% of bypass surgeries were off-pump. This trend could be in part due to the 2009 VA study, which was featured in a 2012 Cochrane Database Systematic Review. After surveying the available evidence, the review recommended that on-pump surgery be the standard approach to cardiac bypasses.

A five-year follow-up of the same group of patients, published in 2017, continued to show that on-pump surgery leads to better outcomes. Off-pump patients had a 28% higher risk of death than the on-pump group. The on-pump group also had fewer major cardiac events (such as nonfatal heart attack) and less need for repeat heart procedures.

The team published a 10-year follow-up study in 2022. In this follow-up, the researchers did not find a significant difference in all-cause mortality between the groups. Patients in the off-pump surgery group were more likely to required revascularization—meaning they needed another surgery to restore blood flow—sooner than the on-pump group. No advantages to off-pump surgery were found. The researchers concluded that, unless otherwise indicated, traditional on-pump surgery should be the default procedure of choice.

The study was funded by VA’s Cooperative Studies Program.