ORD Home » Research_in_action  »  Advances in the treatment of laryngeal cancer

Advances in the treatment of laryngeal cancer 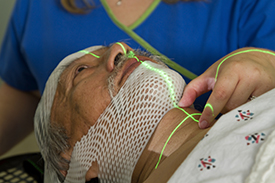 In 1991, a team of VA surgeons published the results of a study on laryngeal cancer that has spared tens of thousands of Veterans and other Americans the ordeal of recovering from major surgery and enabled them to continue to speak in their normal voices.

Laryngeal cancer, or cancer of the voice box, is one of the most common types of head and neck cancers. It affects more than 13,000 adults in the United States every year. Aging, smoking, moderate to heavy alcohol use, poor diet, and regular exposure to dangerous fumes and chemicals all increase the risk of developing this sometimes-fatal disease.

The options for treating laryngeal cancer include radiation, chemotherapy, and surgery. Surgery for this type of cancer can include removing a patient’s vocal cords, or even the entire voice box. When this is done, patients lose their ability to speak without artificial aids, they must breathe through a permanent breathing opening in their neck, and their sense of smell and taste is diminished.

Such surgery, called a total laryngectomy, is considered drastic today and is only performed when there is no other alternative—thanks to the work of VA physicians nationwide who participated in the VA Laryngeal Cancer Study Group.

They found that, two years after the conclusion of treatment, the estimated survival rate was 68% for both groups. This meant chemotherapy and radiation was as good a course of treatment as total laryngectomy and radiation, and patients with even advanced forms of the cancer could avoid the trauma of losing their voices permanently without fear they would be further jeopardizing their recovery.

Today, treatment strategies for laryngeal cancer aim at preserving the voice box whenever possible. While early-stage cancers can be treated with targeted surgeries, “today, conservative treatment modalities, including radiotherapy, chemotherapy, targeted molecular therapies and organ preserving surgery are more often used to achieve organ preservation,” according to a 2013 overview of treatment options.

Many cancer survivors over the past three decades therefore have good reason to sing the praises of the VA Laryngeal Cancer Study Group—because they still can!