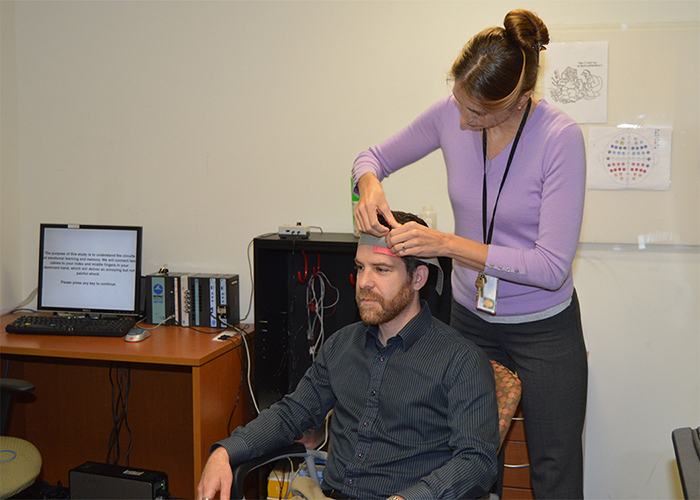 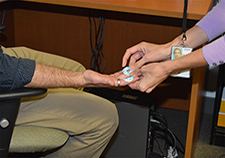 In one phase of the study designed to measure fear conditioning, participants received a mild electric shock on the fingers while viewing a neutral stimulus. (Photo by Kimberly DiDonato-Ferro)

In one phase of the study designed to measure fear conditioning, participants received a mild electric shock on the fingers while viewing a neutral stimulus. (Photo by Kimberly DiDonato-Ferro)

VA researchers say a non-invasive electrical brain stimulation technique may improve the ability of a person with PTSD to remember that certain situations are no longer dangerous.

The findings appeared in a study published in Brain and Behavior in May 2017.

The technique—transcranial direct current stimulation (tDCS)—has been tested experimentally to help treat a range of conditions, including depression, schizophrenia, stroke, obsessive-compulsive disorder, and chronic pain. But this is the first study to evaluate whether tDCS may improve the ability of Veterans with PTSD to withstand potentially fearful moments, according to the lead investigator, Dr. Mascha van ’t Wout-Frank, a neuroscience researcher at the Providence VA Medical Center in Rhode Island.

One of the core problems with PTSD is the inability to escape fearful thoughts, such as a flashback of a buddy being killed in combat. Such thoughts can help fuel PTSD symptoms, which include irritability, anger, nightmares, and insomnia.

“Prior to this study, we completed a similar study in volunteers without posttraumatic stress disorder with promising results,” van ’t Wout-Frank says. “However, given that PTSD has been associated with persistent fear, it was crucial to test these ideas in people with PTSD to see whether our ideas had merit and whether tDCS would have similar effects on these people.”

Fear measured by sweat on hands

The latest study involved 28 Veterans with PTSD. To test their level of fear, the researchers pursued an experiment based on Pavlovian fear conditioning, in which people learn to anticipate unpleasant events when seeing a neutral stimulus. In this case, the neutral stimulus was colored lights, and the unpleasant event was a harmless but highly annoying electric shock to the fingers.

At first, the research team showed the 28 Veterans colored lights in an office room and simultaneously applied an electrical shock to the fingers. Later, the Vets saw the same colored lights on a bookcase but without receiving an electric shock. The latter sequence is known as extinction learning, the process of learning that certain situations or things no longer predict an unpleasant event.

Fourteen of the Veterans received 10 minutes of transcranial direct current stimulation at the same time they experienced extinction learning. The other 14 underwent tDCS immediately after the extinction learning during a period known as extinction consolidation, when information is being processed to go into memory. Twenty-four hours later, all of the Vets were tested on how well they remembered the elimination of the electric shock.

The results showed that the 14 Veterans who received tDCS during extinction consolidation showed slightly less perspiration on their hands than those who experienced the stimulation during extinction learning. Van ’t Wout-Frank explains that skin conductance, which is basically the amount of sweat on the hands, is often used to gauge emotional arousal. In this case, the sweat begins to increase when the Veterans see the light that predicts electrical shock.

“We take this increase as a measure of fear conditioning and thus how well people have learned and remember that seeing the colored lights may result in an electrical shock,” she says.

The researchers placed the electrode that sends the current into the brain over a region—the ventromedial prefrontal cortex—that is believed to play a key role in extinction learning and memory, as well as PTSD. In doing so, they aimed to make neurons in the ventromedial prefrontal cortex more likely to fire off to see if this could help improve extinction learning or the ability to remember that something no longer predicts an unpleasant event.

“For tDCS to be most effective, it is particularly important to control what the brain is doing during stimulation,” van ’t Wout-Frank says. “This is why we applied tDCS when people were doing an experimental task that involved learning or consolidation of learning, which—based on prior research—is associated with neural activity in specific brain regions.”

'Giving the brain a little boost’

Transcranial direct current stimulation is not the only non-invasive electrical brain stimulation technique that has been tested on PTSD patients. Unlike tDCS, transcranial magnetic stimulation (TMS) has been approved by the U.S. Food and Drug Administration for depression. It has also been explored for conditions including PTSD and traumatic brain injury.

But the two techniques differ, van ’t Wout-Frank says, in how they alter brain functioning with the goal of changing behavior. TMS makes use of a magnetic field on the skull that causes electrical signals in the brain to be used by neurons to communicate with each other. Essentially, TMS causes neurons to fire, while tDCS can make neurons more likely to fire. The difference is subtle, but one upshot is that tDCS  works in collaboration with brain activity that is already going on when people are learning new information that needs to be remembered, she says.

“Think of it as giving the brain a little boost when people learn that the colored lights no longer predict an electric shock and store that learning into memory, so people can better remember that they don’t need to fear the lights any longer,” she says.

Van ’t Wout-Frank notes that transcranial direct current stimulation can be used with PTSD patients as long as they meet the medical safety criteria. She explains that people with metal in the head, such as shrapnel; electrically implanted devices; or bipolar disorder may not be good candidates for tDCS because it could affect them negatively. She says if a person meets the safety criteria then tDCS can be combined with existing treatments, such as medication or cognitive behavioral therapy. It is not known if and how certain drugs may influence its effectiveness.

Transcranial direct current stimulation is a relatively safe procedure, but it has side effects. The most common ones are an itchy, prickly, or burning feeling under the electrodes during the stimulation period, with a temporary area of red skin afterward. Moderate fatigue, headache, nausea, and insomnia have also been reported but less often. However, tDCS could be harmful if it isn’t done correctly, and the risk for more serious side effects, such as a burn, may increase, van ’t Wout-Frank cautions.

Technically, anyone can build a tDCS device from materials found in stores, but “putting this on your head without knowing the safety concerns or [electrical] intensities is not recommended,” she says. The tDCS devices that are available online may be better designed for home use, but one should still be cautious when deciding stimulation duration, frequency, and location on the head, she notes.

‘Don’t try this at home’

“I would therefore strongly urge everyone not to try this at home without proper guidance from a clinical or research team, even though one could easily find online videos of people doing just that,” van ’t Wout-Frank says. “With tDCS, it is important to know where you want each electrode to be in order to stimulate the brain in the intended way. Also, how long you will stimulate and with what intensity is important to avoid side effects and obtain the intended effects.”

The researchers on her study call for further testing of tDCS to learn if it can be applied clinically to improve the ability of Veterans with PTSD to shed fear. She hopes to explore whether the technique can be paired with trauma-based exposure therapy, which she calls the “current gold standard for PTSD treatment.”

Prolonged exposure is a form of psychotherapy that has been shown to effectively treat PTSD. It’s based on the assumption that a patient’s avoidance of painful memories that are linked to his or her traumatic experience will maintain PTSD symptoms. The therapy calls for the patient to retell the story of a traumatic experience in a vivid way and to listen to that repeatedly in a recording, with the idea that such repetition will soften the emotional toll.

Van ’t Wout-Frank says she and her team are expecting VA funding to test the effectiveness of combining tDCS with exposure treatment on a large sample of Vets with PTSD.

“Applying tDCS while or after people with PTSD undergo exposure treatment for PTSD may create a faster and more robust treatment effect,” she says. “We hope to see if this approach can reduce PTSD symptoms and increase quality of life.”