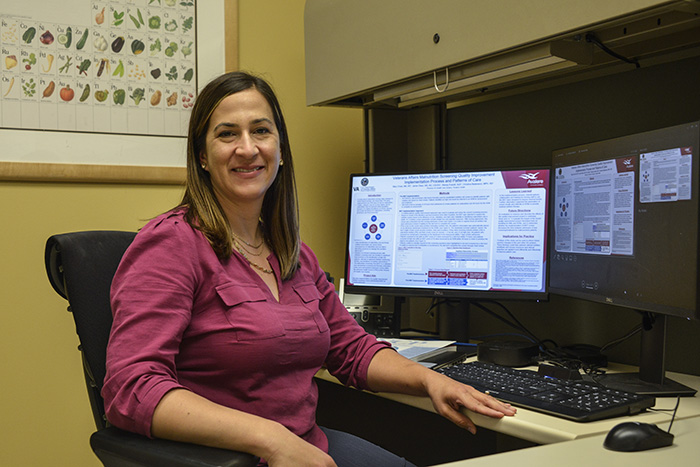 Mary Chew, a research dietician at the Phoenix VA, gives presentations to medical trainees to educate them on the challenges of Veteran malnutrition. (Photo by Darlene Seltmann)

"The Veteran population is a unique demographic that often struggles with chronic conditions, mental illness, poverty, and food insecurity. Veterans have been shown to experience higher rates of malnutrition than their civilian counterparts, likely due to these issues."

Mary Chew is a research dietitian at the Phoenix VA Health Care System. She’s leading a team that is working on a quality improvement project to evaluate the process used to screen for malnutrition in Veterans admitted to the hospital. Early identification of malnutrition risk and timely nutrition treatments are key to allocating resources to effectively manage the condition.

Chew and her colleagues use a malnutrition screening tool (MST) for all patients admitted to the Phoenix VA hospital, three-quarters of whom are 65 and older, a demographic that is susceptible to malnutrition.

Non-VA researchers created the tool in 1999 as a quick way to identify hospitalized adult patients at risk for malnutrition who may benefit from nutrition programs. In a 1999 study, the researchers tested the tool in an adult population of 408 acute care patients. They found its accuracy for assessing whether someone is malnourished to be between 93% and 97%. The tool includes two questions clinicians ask patients upon admission:

Someone who answers yes or unsure to the first question earns two points. Those who answer yes to the second question get a point. A score of at least two requires follow up by a dietetic technician, and a score of more than three requires follow up by a registered dietitian. A dietetic technician promotes nutritional and wellness programs and designs balanced meals. A registered dietitian analyzes a patient’s health status, goals, and dietary restrictions, tracks dietary intake and progress, and educates patients on how to maintain a balanced diet.

Preliminary results from Chew’s quality improvement project show that more patients have been diagnosed with malnutrition in the Phoenix VA since the researchers began using the MST to screen patients for malnutrition. Chew says the official results will be published soon.

At the Phoenix VA, Chew gives presentations to medical trainees to educate them on the challenges of Veteran malnutrition. After serving as a dietitian in the intensive care unit, she became interested in improving nutrition support for critically ill patients and got involved in a series of multisite research and quality improvement projects, some of which have not been published.

Those projects, she says, have been a “great steppingstone” to collaborating with other nutrition professionals, developing protocols, and leading the implementation and evaluation of other quality improvement projects that have enhanced the identification and treatment of malnutrition. Focusing on nutrition support, she has also worked closely on studies with oncology and gastroenterology physicians.

VA Research Currents: What influenced you to get involved with Veteran malnutrition?

Chew: I have always been interested in providing nutrition therapy to Veterans with acute and chronic illnesses that prevent them from being able to meet their nutrition needs. This population is particularly at risk for becoming malnourished and, as a dietitian, I have seen the negative impact malnutrition has on the ability to recover from illness, tolerate life-saving treatments such as chemotherapy, and regain quality of life. It was from these experiences with Veterans that I became passionate about preventing and treating malnutrition in this vulnerable population.

Are Veterans susceptible to malnutrition?

The Veteran population is a unique demographic that often struggles with chronic conditions, mental illness, poverty, and food insecurity. Food insecurity is a lack of a consistent access to food for a healthy and active lifestyle. Veterans have been shown to experience higher rates of malnutrition than their civilian counterparts, likely due to these issues. Additionally, access to food is essential to maintaining wellness, putting homeless Veterans at higher risk for malnutrition.

Does VA have programs in place to address malnutrition?

Dietitians in VA follow the American Society for Parenteral and Enteral Nutrition and the  Academy of Nutrition and Dietetics. In 2009, the two organizations collaborated to release guidelines in efforts to standardize the diagnosis of malnutrition. The guidelines say malnutrition is present if two of the following six characteristics are met: insufficient energy intake, weight loss, loss of muscle mass, loss of subcutaneous fat, localized or generalized fluid accumulation that may sometimes mask weight loss, and diminished functional status as measured by hand grip strength.

Once a patient meets at least two of these six characteristics, dietitians can enter a nutrition diagnosis into the medical record and notify the medical team. If the physician agrees with the diagnosis, the appropriate diagnosis can be made, which may increase the complexity of care related to reimbursement to cover patient care costs. Most importantly, the diagnosis increases the awareness of malnutrition across the interdisciplinary team for prompt and tailored approaches that prevent complications and improve health outcomes for Veterans.

Are there plans to disseminate the malnutrition screening tool to VA medical centers around the country?

The MST is used throughout the VA acute care hospitals and in many other health care institutions. As VA was creating other standardized admission screening tools, the MST was chosen to be added to the nurse admission screen for its simplicity and reliability in identifying patients at risk for malnutrition. At the Phoenix VA, we experienced improvement in awareness and communication within the interdisciplinary team since implementing the screening tool in 2019. We are now in the process of evaluating these outcomes, as well as improvements to the nutrition care process resulting from its implementation.

Although your focus at the Phoenix VA is malnourished Veterans who are admitted to the hospital, you rely on a 2017 study about malnutrition among older Veterans in home-based primary care. Why is that so?

That’s a great question. The home-based data are the only data that we have for Veterans. It’s real difficult to nail down the number of people who are malnourished in the hospital because of the various ways to diagnose malnutrition. We don’t have that data. That’s why I use the home-based primary care study, although you could say it’s not exactly applicable to the in-patient population. That study is one of the only ones with Veterans that shows specific percentages. In this case, the study found that 15% of Veterans are malnourished and 40% are at risk for malnutrition. The study also concluded that Veterans may be at higher risk for malnutrition than the general adult population because of a greater prevalence of chronic disease and social risk factors for malnutrition, including alcoholism and food insecurity.

The methods of diagnosing malnutrition in patients are not always congruent with each other, so different studies show different percentages. We have different guidelines like the Academy of Nutrition and Dietetics, the American Society of Parenteral and Enteral Nutrition, and the Global Leadership Initiative on Malnutrition. Dietitians like myself use a set criteria by one of those organizations. When you have various methods of diagnosing malnutrition, it is hard to narrow down a percentage. This represents a gap in knowledge and is an area needing further study.