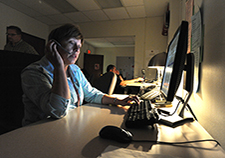 A counselor in action at VA's Center of Excellence for Suicide Prevention, which houses the Veterans Crisis Line and other services. The center will play a role in a VA clinical trial of the drug lithium for suicide prevention. (Photo by Robert Turtil)

A counselor in action at VA's Center of Excellence for Suicide Prevention, which houses the Veterans Crisis Line and other services. The center will play a role in a VA clinical trial of the drug lithium for suicide prevention. (Photo by Robert Turtil)

As a drug, lithium has been around since the 1800s. Made from a whitish mineral found in rocks, the drug is widely used today as a mood stabilizer, especially for those with bipolar disorder.

Some studies suggest it may also be useful for preventing suicide. But the theory needs further testing.

Enter VA's Cooperative Studies Program (CSP). The program is gearing up to launch a major trial involving more than 1,800 Veterans from 28 VA medical centers. The study will include only those with bipolar disorder or depression who recently survived a suicide attempt, or were hospitalized to prevent one.

Some 12,000 VA patients with bipolar disorder or depression survive a suicide attempt every year. Experts say such patients remain at increased risk of suicide for the rest of their lives.

The new study will enroll Veterans for three years and follow each patient one year. The study team will look at outcomes such as repeat suicide attempts and hospitalizations to prevent suicide, as well as deaths from suicide. Half the study volunteers in the randomized, double-blinded trial will get a form of the drug known as lithium carbonate, in an extended-release tablet to minimize side effects. The other half will get a placebo.

All will get VA's standard mental health care, plus extra care coordination: The study team will follow up with each patient throughout the study, and give regular updates to other care providers.

VA Research Currents spoke with three members of the study team to learn more about the research effort, which was announced by President Obama at the American Legion national convention in August 2014.

Study chair Dr. Ira Katz, a psychiatrist based in Philadelphia, is a senior consultant for VA's Office of Mental Health Operations.

Study director Dr. Matt Liang is a "trialist" at the Boston CSP Coordinating Center who has led close to 30 clinical trials in his career, some with VA but most through the National Institutes of Health and the Centers for Disease Control and Prevention. He is also an internist with Brigham and Women's Hospital and a professor at Harvard Medical School.

Katz: The observation that patients on lithium were less likely to die from suicide has been around at least since the 1980s or early 1990s. It's been seen mainly in studies in which lithium was being used to treat bipolar disorder or depression. There have also been epidemiologic studies in different parts of the world that have found a correlation between lower suicide rates and higher levels of lithium in the drinking water.

This has all helped lay the groundwork for our study. We're looking directly at whether pharmacologic doses of lithium do indeed have an anti-suicide effect.

This has been a confusing and difficult issue from a research standpoint because lithium has a substantial number of side effects, and it is dangerous in over-dosage. In fact, it can be fatal. So the question has always been this: When we see that patients on lithium are less likely to commit suicide, is it because lithium really does have anti-suicide effects, or is it because doctors don't dare give lithium to anyone who is at risk for suicide, for fear they might intentionally overdose?

That sort of puzzle, in which it looks like lithium has anti-suicide effects, but it may be because the people who are prescribed the drug are at less risk to begin with, is called an indication bias. That's been the major problem in interpreting the observational studies.

To the extent researchers have been able to tease out the answer from database studies, they've argued that the drug probably does have anti-suicide effects. But the gold standard to know about causality and to establish the effectiveness of a treatment is a randomized clinical trial, and that's what we're doing.

What is the study team doing to ensure lithium is used safely?

Liang: Lithium has a narrow toxicity-efficacy ratio. That means there's a relatively small difference between the effective therapeutic dose and the higher dose that would be toxic. So we've tried very hard to minimize the possibility of harm. We're being extremely careful about who we include, and how we monitor the lithium levels and potential side effects. We have two central consultants, Dr. Malcolm Rogers, a psychiatrist, and Dr. Chester Conrad, a cardiologist, who will be available 24/7 to assist the sites. The protocol meets or exceeds any published guideline on safe usage, and is probably over and above what is done in normal clinical practice, in VA or the general psychiatry community.

Morgenstern: We're also using an extended-release form of the drug. The coating tends to make it more tolerable and decrease the severity and frequency of side effects.

Do scientists understand how lithium might work in the brain to prevent suicide?

Katz: We have some insight on this from looking at what happens in clinical populations receiving lithium. Suicide rates seem to be lower both in patients for whom lithium has worked well to treat the underlying psychiatric symptoms, and in those for whom lithium has worked less well. And that's led to the notion that the drug may have anti-suicide effects that are independent of its effect on depression or bipolar disease.

So while the primary goal of the study is to see if lithium prevents repeat suicide attempts, one of the secondary goals is to determine, if we do have a lithium effect, whether it is due to better control of the symptoms of depression or bipolar disorder. That's an important secondary analysis.

But we really don't know in-depth the cellular or molecular mechanisms of lithium for treatment of bipolar disorder or depression, and we know even less about what could explain its possible anti-suicide effects. We suspect if this study is positive, and we have definite evidence that a drug can prevent suicidal behavior, it will stimulate a good deal of pharmacologic research trying to look for other medications that may have a comparable effect.

How is the study going to recruit participants?

Morgenstern: One source will be referrals from clinicians. There'll also be some targeted outreach, and limited advertising in the form of flyers around the VA medical centers that are taking part. We chose those centers that had higher numbers of patients with documented past suicide attempts. We determined that by using the SPAN database. [SPAN is VA's Suicide Prevention and Application Network, coordinated out of the Center of Excellence for Suicide Prevention at the VA in Canandaigua, New York.] We'll also have access to the screening logs that the sites use, and then we can supplement them with people that they might be missing, so they can try and target those people as well. SPAN will be an invaluable asset. We couldn't do the study without it.

All VA medical centers have suicide prevention coordinators. What role will they play?

Liang: We're collaborating with the suicide prevention coordinators, but we're trying to do it in the most ethical manner possible. They will let potential participants know about the study but won't explain it in any great detail, or actually enroll them. We didn't want any care providers to be conflicted, or to potentially be coercive to people who are potentially vulnerable after a suicide attempt.

If lithium proves effective for suicide prevention, will patients be able to stay on the drug long- term?

Katz: The study itself is one year. In terms of how lithium might be used if we demonstrate an effect, it's important to note that many people with bipolar disorder have been on lithium for or 10, 20, 30 years and managing quite well. We also know that people who have survived a suicide attempt can be at increased risk for suicide for the rest of their life. On the other hand, there are concerns that long-term use of lithium may lead to decreased kidney function.

Will the patients in the study be followed longer than one year?

Katz: Because they are in the VA system, we'll be able to keep an eye on these patients over the longer term. VA already has an infrastructure and a system for tracking suicide-related behaviors, mainly through the suicide prevention coordinators, who are funded separately from the study. We have that system of care in place, and it is one of the unique benefits of VA.

What might be some next steps after the study ends?

Katz:This study is looking at the effects of lithium in doses that are used pharmacologically. If this is positive, our next question might be whether you need such high doses, or whether far lower doses might also be effective. However, the most important question is about how we would translate findings from the study into improved care. For this, we would make sure that mental health staff and other care providers in VA are aware of the results, and that all VA psychiatrists know how to use lithium to prevent suicide.

Liang: This is the first real test of lithium for suicidality. If the results are positive, it will open up a number of opportunities for understanding how the finding might be applied to a broader population, both in and beyond VA.

To learn more about the trial, expected to launch this fall, click here or go to clinicaltrials.gov and enter the search term CSP 590.