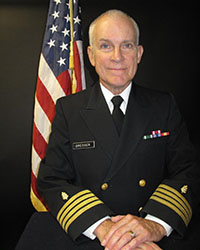 Dr. Thomas Dresser, a nuclear medicine physician and retired Navy captain, is helping lead a clinical trial focusing on the effectiveness of a drug to spot the location of prostate cancer in the body.

Dr. Thomas Purinton Dresser, a Navy Veteran, is the chief of nuclear medicine at the Harry S. Truman Memorial Veterans’ Hospital in Missouri. As a general nuclear medicine physician, he performs a range of diagnostic and therapeutic procedures. He has authored 31 papers, mainly on nuclear medicine, which involves the use of radioactive drugs pharmaceuticals in research, diagnosis, and treatment. He is also a clinical professor in radiology and medicine at the University of Missouri, where he earned a doctorate in physiology in 1972 and a medical degree in 1974. He served in the Navy Medical Corps from 1971 to 1992, reaching the rank of captain in 1987. His awards include the National Defense, Humanitarian Service, Navy Commendation, and Meritorious Service medals.

My grandfather, Thomas Purinton, enlisted in the Navy at age 16 in 1899 and was assigned to the square-rigger USS Essex, and my Massachusetts ancestors fought in the Revolutionary War, so I was favorably disposed to military service. When I was a second-year medical student in 1971, one of my colleagues was accepted into the Medical Osteopathic Scholarship Program, which is the Department of Defense program to recruit future physicians. I was accepted, too, and became a Navy ensign on active duty while I completed medical school.

Since my childhood, I have had an analytical and quantitative view of the world. As my academic skills developed, I could apply these interests in a meaningful way. I came to see academic medicine in the military and VA as encouraging environments to pursue research. When I first applied for a Navy medical scholarship in the 1970s, Dr. Donald Custis was the surgeon general of the Navy. [He was later VA’s chief medical director.] I remember that very vividly because I applied and was not accepted. Then I wrote a personal letter to him saying, `I really, really, really want to join the Navy and be a Navy doctor.’ I was accepted two weeks later.”

My father, Dr. Thorpe Dresser, was a research petroleum chemical engineer who designed oil refineries. He received 19 U.S. patents during his 40-year career. I gained the insight of a research scientist from him. My mentor in nuclear medicine was Navy Capt. Dr. James Winebright, who was an insightful physician and a great teacher.

I served at a naval hospital in Oakland, California, from 1974 to 1992. After training in internal medicine and nuclear medicine, I became a staff physician, department head, and service line chief. In 1985, I became head of the department of research. In 1986, I was surgeon for an amphibious squadron and served aboard the USS New Orleans, an amphibious assault ship.  Understanding and using the operational structure of the military has been a major positive influence in my professional career.

Myocardial perfusion imaging is very useful in evaluating Veterans with heart disease.  Analyzing 50,000 patient studies has resulted in many publications, and it served as a basis to establish a training program for physicians in the Cardiovascular Disease Fellowship where I am director. Currently, with my colleague Dr. Timothy Hoffman, we are carrying out a Phase III clinical trial of Ga68-PSMA-11, a radiopharmaceutical that eases the process in spotting cancer, for evaluating patients with carcinoma of the prostate. This type of radiopharmaceutical appears to be the best diagnostic tool for evaluating the stage of the prostate cancer and whether it has metastasized in the body.

The pharmaceutical selectively binds to the prostate cancer membrane because of the protein called PSMA, Prostate Specific Membrane Antigen. We get the PSMA drug in a small vial from a company. We connect the vial right to a generator, where the PSMA binds with Gallium 68, which gives off the radioactivity in the form of a positron that we can detect with a Positron Emission Tomography (PET) scanner. We scan the entire body and can identify prostate cancer with a higher degree of accuracy than a CT (computed tomography) scan or a bone scan.

Military medicine, like VA medicine, provides an environment that is favorable for research activities. Those environments make available time and resources to pursue any valid clinical research idea. The comprehensive electronic health record and a willing patient population minimize many of the problems of clinical research.

Both VA and the Navy are good environments for research. I’ve been fortunate to have a career path to do clinical medicine, research, and teaching. I like all three.

Our Veterans have voluntarily subjected themselves to risks that are known and unknown, and medical problems have resulted. It’s a great reward to find a remedy for these problems when we can. I am a Veteran without a service-connected problem, and I feel a special obligation to fix the medical problems of Veterans when I can.

Does being a Veteran give you a greater emotional tie to the work you're doing or more insight into Veteran's needs?

Having worked at a Navy hospital during the Vietnam War and being deployed on a ship in another hemisphere has given me insight into the medical problems of our Veterans in combat and during training. I find a common bond with Veteran patients that is different from the normal doctor-patient relationship. I have an easy time talking to Veterans. I sit down with them. I ask them what they did in the service, and I talk about what I did in the service. When they find out I’m a Navy captain, we’re brothers in about five minutes.

When Veteran patients come into my office and see the ship I was on and a picture of me 30 years ago when I was assigned to the Marines, we relate right off the bat. As people, we relate instantly because a Veteran basically looks at every other Veteran as being his or her equal. We’re all in the same peer group. With Veterans, there’s less of a hierarchy. The officers respect the enlisted, and the enlisted respect the officers, so we are really one big team. That’s different than civilian medicine. In civilian medicine, people look at their doctors as God and do whatever the doctor says. In VA medicine, we’re more equal, and I think that’s a more desirable situation.

Based on your life experiences to date, what do you believe are the keys to success?  What motivational tips would you share?

Success in life means to find your God-given purpose and pursue it with great effort. This purpose is usually serving others in some way with a skill that you have. Avoid worrying about not having skills that others have.

Theranostics in nuclear medicine is the use of radiopharmaceuticals that have therapeutic and diagnostic applications. The term is a new word intended to convey two processes: therapy and diagnostic. So the same pharmaceutical that binds to the PSMA for diagnosing cancer when labeled with Gallium 68 can also be used for therapy when labeled with Lu177, a radionuclide that emits a beta particle that kills the cancer. I look forward to working in this area.