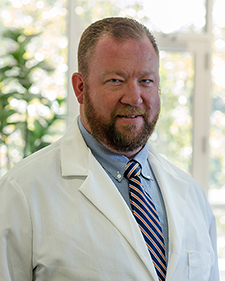 Dr. Ronald Riechers is head of the Department of Neurology at the Louis Stokes VA Medical Center in Cleveland, and medical director of the Cleveland FES Center.

Dr. Ronald Riechers is head of the Department of Neurology at the Louis Stokes VA Medical Center in Cleveland, and medical director of the Cleveland FES Center.

Dr. Ronald Riechers is one of the leading researchers in the country on traumatic brain injury (TBI). As the head of the Department of Neurology at the Louis Stokes VA Medical Center in Cleveland, he's worked hard to develop and improve processes that ensure timely evaluation and follow-up for Veterans with TBI. His training as a neurologist and his military background have enabled him to develop a model for a comprehensive rehabilitation program for Veterans with TBI and polytrauma. Riechers is also a former Army physician who has received many awards for his military service, including the Army Achievement Medal, the Army Commendation Medal, the Global War on Terrorism Service Medal, the Army Service Ribbon, and the Meritorious Service Medal. He respects those awards but believes his greatest honor is the handshake and thanks from a Veteran patient whom he has helped in a clinical setting or with a research innovation.

Riechers: I had a strong desire to serve my country from a young age. I grew up near Wright-Patterson Air Force Base in Ohio and was exposed to many people who were serving and had served. Both of my grandfathers served in World War II, and my great-grandfather served in World War I. So there was also a family history of military service.

Most people who enter the medical profession are scientists at their core who want to understand why things occur in the body and then fix them. Research allows us to advance medicine by asking questions and seeking answers in the lab that can ultimately translate to the bedside. There was so much unknown when I started my medical career, especially in the field of neurology and the neurosciences. Since then, so much has changed in our treatment options and understanding of disease processes.

My most important mentor was my father. He was an engineer and always wanted to understand why things occur the way they do. At the end of his career, he was very interested in biomedical engineering and the electrical functions of the nervous system. We would talk about medical issues regularly, with his questions coming from a totally different way of thinking than mine. That allowed both of us to develop ideas for research. In my military career, now-retired Col. Geoffrey Ling was my closest mentor. He guided me to the specialty of neurology and always made neurology military-relevant. He remains a brilliant scientist and an exemplary military physician. The path of mentorship continued as I entered VA, where Dr. Robert L. Ruff helped to further my pursuit of Veteran-centric research in the field of neurology and traumatic brain injury. 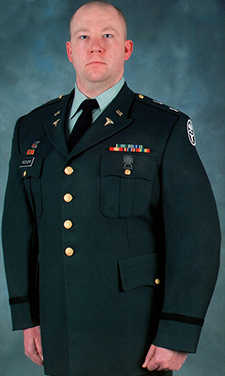 Dr. Riechers upon his promotion from captain to major in the U.S. Army.

Dr. Riechers upon his promotion from captain to major in the U.S. Army.

I served in the U.S. Army from 2000 to 2008. My entire military career was at Walter Reed Army Medical Center in Washington, D.C. My military experience was priceless in my development as a physician and a leader. I entered the military during peacetime and served through 9-11 and the wars in Iraq and Afghanistan. I cared for the best young men and women the United States has to offer: people who were willing to give all for their fellow soldiers and this country. I did not deliver this care in isolation, however. I worked with physicians, nurses, and enlisted personnel who all had the same mission, "To conserve the fighting strength." Working as a team with a common mission and discipline is extremely rewarding and has honed my current leadership style.

You are heavily involved in helping Veterans with TBI, in particular developing a rehab program. Explain more about that. What are your goals?

As an attending neurologist and captain in the Army in 2005, I was tasked to lead the assessment, care, and rehabilitation transitions of severely injured soldiers from Iraq and Afghanistan. I started with a small team of a physician assistant, neuropsychologist, social worker, and several therapists. We organized a process to assess and treat 20 to 30 acutely injured soldiers. During this process, I began to work with the VA TBI rehabilitation centers where our soldiers would be transferred when stabilized for TBI inpatient rehabilitation. As our process evolved and matured, we expanded the team to include multiple specialties, as well as an outpatient clinic. In coming to VA, I have tried to replicate the same outpatient treatment team, with our goals for Veterans including returning to their community and reintegrating into the workforce. Our work impacts the lives of Veterans not only in their functional return to work but also in managing troubling symptoms like headaches and insomnia. Our research looks at differing ends of the spectrum in TBI recovery, including the association between PTSD and mild TBI, as well as targeted treatments and neuromodulation for severe TBI.

Without a doubt, my military experience inspired my current VA career. In leaving the military, I felt it very important to continue the mission I had signed up for when I became a military physician. The obvious connection is the clinical care I continue to provide. But from a research perspective, I am driven by the resilience of injured soldiers and Veterans to find new ways to enhance recovery from the signature injuries of our current conflicts.

Making life better for Veterans is what drives me at work every day. In clinical care, you may be able to help hundreds of Veterans per year. But with a successful research idea that comes to clinical use, you can potentially help thousands of veterans.

One does not have to be a Veteran to provide good care to Veterans. However, being a Veteran provides a context for what I am doing each day and for understanding the issues that Veterans face. Whether it is simply having the shared experience of shining and wearing combat boots, carrying a rucksack, eating a ready-to-eat meal, or having seen the acute effects of an IED [improvised explosive device] â€¦ all of these experiences provide familiarity to patients and can be key to establishing rapport. At the same time, these real-world experiences provide expertise that most researchers don't have, so these experiences can help with the applicability or translation of research ideas.

There are several keys to success. Live and work with honesty and integrity. Whatever you accomplish in life isn't worth it if you have to give up your integrity to get it. Also, remember that no matter the individual's rank, degrees, or station in life, we all put our pants on one leg at a time. That means everyone has valuable contributions, so listen to everyone around you and take in ideas to develop your own ideas. Remain focused on the mission, but don't let the mission overtake you.

I intend to continue to run the neurology service here at the Cleveland VAMC with a goal of delivering high-quality care in an efficient manner. I also plan to remain as medical director of the Functional Electrical Stimulation Center, a VA Research Center of Excellence. I'll work with the center to continue to advance neuromodulation for Veteran-relevant medical conditions.