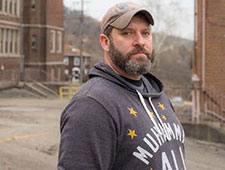 Matt Landis is a computer engineer at the Human Engineering Research Laboratories, a joint project between the VA Pittsburgh Healthcare System and the University of Pittsburgh.

Matt Landis is a computer engineer at the Human Engineering Research Laboratories, a joint project between the VA Pittsburgh Healthcare System and the University of Pittsburgh.

Matt Landis is man with a passion for service. The Army Veteran is a computer engineer at the Human Engineering Research Laboratories (HERL), a joint project between the VA Pittsburgh Healthcare System and the University of Pittsburgh. He and the HERL staff work to create wheelchair technologies, advanced prostheses, and other innovative systems that improve the quality of life for people with disabilities like lost limbs and spinal injuries. He was originally recruited to participate in HERL’s ELeVATE program, which is designed to re-integrate Veterans into college. He graduated from the University of Pittsburgh with a degree in electrical engineering in 2016, after which he became a full-time employee at HERL. He served two tours in Iraq as an Apache helicopter pilot and earned many honors, most notably the Army Commendation Medal. He’s been featured in the video series “Living to Serve,” which is produced by the internet search engine Google.

I actually joined twice. The first time, the motivation was purely machismo. The captain of the rugby team I played for at the time was a former special forces medic. I wanted to be just that. I wanted to be as tough and able as he always seemed, and he encouraged me to pursue that path. Ultimately, I didn’t follow in his footsteps and made my own way.

It was purely because of my son. All three of my children are on the autism spectrum. But my middle child is severe and non-verbal at 15 years old. Ever since he was young, we’ve had to innovate to communicate with him. With my technical background, I’ve been researching methods for facilitating communication and exploration with him since he was diagnosed. When I heard there was a specific field for this, termed rehabilitation science and technology, or rehab engineering, I immediately began searching for a program. The first name that came up was Dr. Rory Cooper, the director of HERL and my mentor. Once I saw the work he was doing, I knew where I needed to be.


Have you had mentors who you’ve looked up to in life, the military, or your research career?

Absolutely. I think everything I am is built on my ideas about and the study of certain people, both historical and contemporary. Chief among them are Robert Kennedy and Muhammad Ali. They’re both fighters who spent their lives growing, changing, and becoming better people, all through the most difficult circumstances imaginable. I lost my parents and grandparents when I was young and had a brother murdered. So I’ve always looked at those men as models for how I can fight through and do good. In my military years, I always had at least one mentor that helped me grow and learn. Officers Dennis Yates and Kenneth Royar were two of the most impactful. I worked directly under each one and learned a leadership style from them that I try to emulate. They were patient, thoughtful men who embodied the essence of servant-leaders. They were the first real-life warrior poets I would meet. I’ve tried to walk in their steps ever since. In my research career, Dr. Cooper stands alone. He’s a generational luminary, the kind of man that you can’t stand next to without being better and doing better. He takes away every excuse you make for yourself in life just from the example he sets. 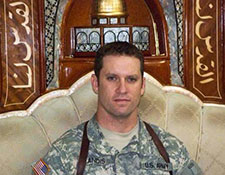 I joined the Army as a forward observer in 1999 and served with the 187th Infantry Regiment at Fort Campbell in Kentucky until 2002. Just before 9-11, I was selected for warrant officer candidate school (WOCS) and left in January 2002 for Fort Rucker in Alabama. There, I would complete WOCS and flight school, graduating as an AH-64D Apache Longbow pilot. I was assigned to the 11th Aviation Regiment in Illesheim, Germany in 2003. I joined that unit in Iraq in June 2003 as an Apache helicopter pilot and remained with it until February 2004. After a promotion to chief warrant officer and a transfer to the 3d Armored Cavalry Regiment, I was sent to Fort Hood in Texas in 2006. I served the rest of my career in that unit, deploying to Iraq from 2007 to 2009 as part of the Iraq war surge efforts at the time. I left the military shortly after redeployment in July 2009.

We develop technologies at HERL that improve the quality of life and independence for those with disabilities. Much of the lab’s early work focused on wheelchair technologies and adaptive sports technologies. While we continue to lead academic exploration in those areas, we also have projects dedicated to advanced prostheses, robotics, and adaptive communications. We also are working on projects that may advance detection and treatment of PTSD-driven episodes in real time. All of those are applicable in the Veteran space and contribute to Veteran health and well-being.


You say, “I realize service doesn’t end when you get out of the military. It just changes.” Please elaborate on that comment.

Service is a pretty nebulous concept. I always considered my mother’s work as a nurse as service. I think the same of teachers, social workers, and increasingly, coaches and non-profit leaders. I heard recently from the imam of a local mosque that service is the act of enduring some hardship or sacrifice for the love of something greater. That’s the best definition I’ve heard for service, which can take a lot of shapes. Military service was my way of squaring up with the nation for taking care of me as a child, educating me, and giving me a safe and stable environment in which to grow. Now, I see things that need to be done in my community, and I believe I have something to offer in progressing toward solutions. I’m obligated to serve in my community as a way of paying my rent in the city of Pittsburgh, which is educating my children and giving all of us a safe, stable place to grow.


You have a son with autism who is non-verbal. Does he inspire you in life or in the work you do at HERL?

He does more than inspire me in life. He informs it. Any successes I’ve had were generated largely by my tendency to notice very subtle details about a problem. In my community work, it’s the essence of any intuition I’ve had for coalition building or fundraising. As an engineer, it’s the key to innovation and design thinking. It’s all about empathy, and empathy is the only way I can communicate with my non-verbal child. A lifetime of intense focus on his non-verbal communications, physical cues, and changes in breathing or pace has made me hyper-sensitive to the subtleties of observation and deep listening. It’s one of the most important assets I lend to any effort that I’m part of.


You had several concussions while playing for the U.S. Army rugby team and were in a helicopter accident in an Army training exercise in Germany. All of that resulted in a traumatic brain injury (TBI) that prevented you from ever again flying in the military. How have you overcome that setback?

The steps I’ve taken to overcome that have been diverse. Much of my comeback is attributable to the passage of time and better self-care. Therapists led me to believe that the intensity of my problems would lessen with time and more intensive therapies. All of that appears to be true. As an engineer, I had to come up with new systems for performing even elementary mathematical operations, and every building block I’d once gained had to be regained through trial and error. Ultimately, through exhaustive experimentation and good alternative therapies like art and cognitive behavioral therapy, I’ve learned to adapt to my work.

Actually, not really. I believe that just as with the military, Veterans should model the best of what America can be. I’m proud that we do that at HERL, a VA Center of Excellence research facility. I chose HERL mainly because I knew that the people here would be quality individuals and would understand my unique circumstances as I changed careers.

It’s essential to what drives me. I can see the impact of thoughtful, well-designed technologies on disabled people. I can see how badly we’ve needed them with my son and with me. I can see directly how life-changing these innovations can be, and that everything we do can potentially increase a person’s freedom. That’s what ties it all together for me. At the end of the day, we’re doing here just what we did in the military. We’re defending and expanding freedom for people. It’s great that it helps Veterans, but we do it for everyone.

Don’t slow down. Failure should not be something we fear in our work. One should plan for it and take advantage of it. Failure is the ultimate learning opportunity. Fail fast, pivot, and keep moving. Momentum is not just a phenomenon in physics. The other thing that has been vital to my success as an innovative thinker is diversity. I’ve had the luxury of knowing so many people from different cultures, classes, religions, and experiences. That has been key to developing imagination. Every interaction you can have with people not like you is a chance to add their perspective to your toolkit. When I build a team, I intentionally prioritize diversity. Diversity should be a tireless pursuit. Explore as many topics as you can in your reading. Sit down and listen to every kind of music you can find. Seek out the things you think you won’t like but that others are into and try to find out why. Diversity and breadth of experience are so important.

I’m expanding my voice in advocacy. I hope to eventually attend law school or a public policy school to develop a stronger voice, and to lead others to mobilize their voices for effective change. VA is a living ecosystem and should always be challenging itself from the inside out. I hope I can always be a part of the voice doing the challenging.