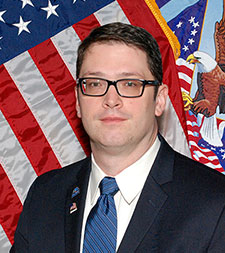 Dr. Justin Benzer is a research health scientist at the Center of Excellence for Research on Returning War Veterans at the Central Texas Veterans Health Care System.

Dr. Justin Benzer is a research health scientist at the Center of Excellence for Research on Returning War Veterans at the Central Texas Veterans Health Care System.

Dr. Justin Benzer is a research health scientist at the Center of Excellence for Research on Returning War Veterans at the Central Texas Veterans Health Care System. He focuses on industrial-organizational psychology, which is the scientific study of human behavior in organizations and the workplace. He’s striving to apply the principles of individual, group, and organizational behavior to solving problems at VA, with specific attention to teamwork in the care of chronic diseases and the integration of mental health and medical care. He served in the U.S. Army for five years and received the Joint Service Commendation Medal for intelligence analysis support as a team leader during Operation Desert Fox, a brief bombing campaign on Iraqi targets in 1998.

College funding. I was attracted to the idea of being in the military. But I joined because the recruiter had good timing. I had missed the college financial aid deadline and had worked all summer but earned enough money for only one semester. The recruiter called in August 1994, and I signed up.

I went back to college after the military and took a class in industrial-organizational (I/O) psychology. It turns out that I/O psychologists have been deeply involved in designing a lot of personnel systems in the military, so it really resonated with me. I earned a bachelor’s degree in psychology at the University of Massachusetts. I went to Texas A&M University for graduate school partly because I thought I may be able to find a way to do some military-related I/O research. In my second year, some VA researchers, including Dr. Mark Kunik and Dr. Sylvia Hysong, presented their work on how I/O psychology was important for VA. I did pre-doctoral work with them and applied for a post-doctoral fellowship at VA Boston. I earned a master’s and doctorate in industrial-organizational psychology at Texas A&M.

I’ve been very lucky with mentors. The best career choice I made was to seek out a VA post-doctoral fellowship. I’ve seen that VA researchers, and in particular those in VA research centers, are really collaborative and supportive. They want to mentor junior researchers. I also had some great mentors in the military, but it is the VA mentors who have really made a difference in my life. 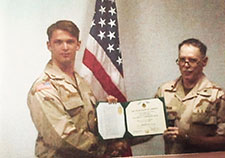 Benzer (left) received the Joint Service Commendation Medal in 1999 while stationed at Eskan Village in Saudi Arabia with the Intelligence directorate of the Joint Task Force-Southwest Asia.

Benzer (left) received the Joint Service Commendation Medal in 1999 while stationed at Eskan Village in Saudi Arabia with the Intelligence directorate of the Joint Task Force-Southwest Asia.

I served as a sergeant in the Army from 1995 to 2000. I went to language school at the Defense Language Institute in California to learn Arabic but couldn’t learn it fast enough. I reclassified as an all-source intelligence analyst and trained in Fort Huachuca in Arizona. I then spent three years at Fort Hood in Texas with the 504th Military Intelligence Brigade working in personnel security. I spent my last year in Saudi Arabia working with Joint Task Force – Southwest Asia. That was a great experience because I was allowed to take on a lot of responsibility in analyzing and reporting intelligence data that was collected across the region. I loved working with the other services and also our British colleagues. I worked on the ground desk and reported to an Army non-commissioned officer and a chief warrant officer, but the desk was led by a British officer.

It’s connected loosely through my work in industrial-organizational psychology. If I hadn’t joined the military, I wouldn’t be an I/O psychologist, and I probably wouldn’t be a researcher.

This is something that I am really focusing on in the current stage of my career. For the past four years, I have been funded through a VA HSR&D Career Development Award. I’ve used that time to develop expertise in implementation science, which is the scientific study of methods used to implement evidence practices. I’ve found that there is a real need to integrate organizational theories into implementation science. This is a really useful way to capitalize on my training and to make concrete differences in the care that Veterans receive.

Maybe. I do have a strong emotional tie to this work. But I think that anyone with personal connections to Veterans would do as well. I enjoy working with Veterans, my current research center is heavily staffed with Veterans, and I feel a kinship with other Veterans. Outside of VA, I haven’t had many opportunities to interact with Veterans.

From a research perspective, I’m getting involved in projects that implement new practices in clinical settings and that improve current practices. My goal is to develop and test implementation strategies, which are methods for supporting implementation work. I’m working to develop a portfolio of implementation strategies that are derived from organizational theories. Regarding my career more broadly, there’s too much uncertainty in research to be able to clearly see the next steps. Dr. Mark Bauer, one of my mentors at the VA Boston Healthcare System, says when in doubt, do good science. That’s pretty much what I’m trying to do. I know if I can do that, I will have lots of opportunities.