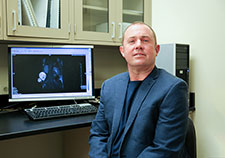 Dr. Jeff Smith, an Army Veteran, is a research health scientist at the Harry S. Truman Memorial Veterans' Hospital in Columbia, Missouri. His research is aimed at developing a multipurpose tool that allows for the early diagnosis of prostate cancer and treatment of the disease. He's the author of more than 100 peer-reviewed journal articles on the subject. He has received a myriad of professional awards and is a member of Sigma Xi, the scientific research honor society. He served in the Army from 1990 to 1992 and spent time in the Army reserves, before being honorably discharged due to a service-related disability.

I’ve always admired the service of my three cousins in the Army and Marine Corps. Second to this, I have always taken a degree of pride in a disciplined lifestyle, and I felt the Army would offer this to me, as well. I also realized that the opportunity to pay for my college education through the GI Bill was an enticing benefit.

As an undergraduate student at Missouri State University, I began doing research under the mentorship of Dr. Tamera Jahnke, one of my professors. I was always inspired by the thought of “bench to bedside” or “applied” scientific research, which starts in a laboratory with the ultimate goal being the administration of the drug to the patient. I was able to further my research under the mentorship of Dr. Kattesh Katti and Dr. Silvia Jurisson, two of my professors in graduate school at the University of Missouri. There, the design and development of site-directed, cancer-seeking therapeutic and diagnostic agents became my life’s passion. 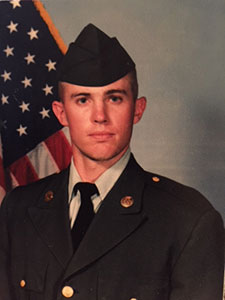 Smith is pictured when he was at Fort Sill in 1991.

Smith is pictured when he was at Fort Sill in 1991.

I’m not a combat veteran of the U.S. Armed Forces. I was, however, in Fort Sill in Oklahoma, where I was assigned to field artillery. I was at Fort Sill when we mobilized for Operation Desert Storm in 1991. To this very day, I’m inspired by what I saw. I can honestly say that my military experience, albeit brief, is something that I cherish to this very day. It was an honor to have served the United States and to serve our country even now. I don’t consider myself a warrior like many who signed on after 9-11. Those men and women have my ultimate gratitude and respect. Nonetheless, I’m truly proud to have had the opportunity to serve our great country.

The main objective of my research is to develop molecular vehicles that are tagged with an imaging radionuclide. These vehicles, when administered intravenously, will seek out receptor-expressing cancer cells that we can visualize with external imaging cameras. We believe this approach will produce a new family of targeting agents that could be useful in the early detection and staging of local and metastatic prostate cancer. The latter means the cancer has spread to other areas of the body.

Early diagnosis and viable treatment strategies for patients with prostate cancer continue to be a primary research interest in the U.S. and abroad. This research provides rationale for the development of a new diagnostic agent based on two well-validated biomarkers for the early detection of prostate cancer. Therefore, it is central to VA’s research mission to seek fundamental knowledge to enhance health, lengthen life, and reduce illness and disability of Veterans.

Clinically, there continues to be major concern with the diagnosis and treatment strategies for patients with early- or late-stage prostate cancer. For example, the treatment regimen is of particular concern for older patients, who are often treated very aggressively for non-aggressive tumors.  An estimated 21 million Veterans live in the United States. Of those, about 9.6 million are men ages 65 and older. More than 70 percent of prostate cancer cases involve men 65 or older. According to the Prostate Cancer Foundation, one in six men will be diagnosed with prostate cancer. Therefore, it is estimated that 1.6 million male Veterans 65 and  older may now have or may develop prostate cancer, resulting in as many as 250,000 deaths.

In all honesty, my military experience did not inspire me to pursue the career path I chose. But when asked in college about my future as a scientific investigator, I would always answer that I hoped to someday work at the U.S. Department of Veterans Affairs. Never in a million years did I dream that would come to fruition.

It gives me great pride to think that I can be helping Veterans that I see each day in the hallways of the Harry S. Truman Memorial Veterans’ Hospital.

One must understand that in all aspects of life, you must be willing to not only accept a leadership role, but also the role of a follower. In other words, it is of utmost importance to be willing to continue to learn and to not always be the teacher. A wise fellow once said that you will always continue to learn by making mistakes. I’ve made plenty of mistakes, so I must be wise beyond my years!

I intend to apply, possibly this year or next year, for research career scientist status.