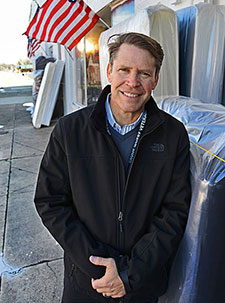 Dr. Jeff Pyne, a Navy Veteran, is a psychiatrist and mental health investigator at the Central Arkansas Veterans Healthcare System in Little Rock. He conducts research on PTSD and other mental disorders. He directs the hospital’s projects under the VA funding initiative CREATE, which encourages research in high-priority areas that affect the health of Veterans. The projects aim to improve access to proven mental health care therapies for rural Veterans. His research has been funded by VA, the U.S. Office of Naval Research, and the National Institutes of Health. He spent nearly 25 years in the military, both on active duty and as a reservist, and pursued scientific work that impacts his approach to research at VA.

After seeing the debt I was accumulating during my first year in medical school, I started looking for some options. A military scholarship seemed like a reasonable choice. When I compared the location of various military hospitals, a Navy scholarship was the most attractive.

My father worked as a food scientist. I was attracted to the passion and enjoyment I saw in him as he pursued his work. I was also surrounded by successful researchers during my psychiatry residency training at the VA San Diego Healthcare System and the University of California, San Diego (UCSD). So early in my residency training, I decided to pursue a career that combined research and clinical care.

I’m fortunate to have had many mentors in my life, people who were willing to invest their time, talent, and inspiration in me. Specific to my research career, I started talking with different researchers during my residency about my research interests. Over time, my half-baked ideas became clearer to me and others. Eventually, I spoke with Dr. Robert Kaplan, who was in the department of family medicine and preventive medicine at UCSD and later became the chair. In talking to Dr. Kaplan, I realized that my advocacy for patients with mental illnesses could be supported by conducting cost-effective analyses of mental health programs that could be compared with cost-effective analyses of physical health programs. 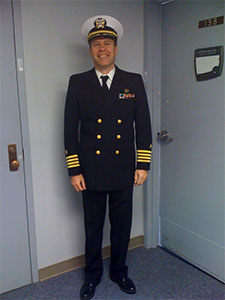 I was on active duty in the Navy from 1988 to 1993 and from 2004 to 2005.  From 1988 to 1989, I was an internal medicine intern at Naval Medical Center San Diego. I then trained in undersea medicine and worked from 1989 to 1993 as a diving medical officer for Explosive Ordnance Disposal Mobile Unit Three in San Diego. After being recalled to active duty, I worked from 2004 to 2005 in the inpatient mental health unit at Naval Medical Center San Diego. While there, I pursued research collaborations that used virtual reality in combination with exposure-based therapy and physiologic monitoring to treat active duty service members suffering from PTSD.

My current PTSD research relates to two areas. The first one involves using heart rate variability as a biomarker to predict PTSD symptoms following combat zone deployment; to predict response to PTSD treatment; and for stress resilience training. The second one involves testing the feasibility and acceptability of a plan to increase VA mental health clinician and community clergy collaboration to address moral injury symptoms related to PTSD, such as guilt, shame, and alienation. Other areas of research include developing a Veteran-centered mental health initiative called the Perceived Access Inventory. It focuses on the mental health treatment initiation and engagement barriers experienced by Veterans. My research goal is to develop and test ways to improve access to and outcomes of mental health programs. I’m always seeking opportunities to conduct cost-effectiveness analyses.

Yes to both. While I worked as a diving medical officer for Explosive Ordnance Disposal Mobile Unit Three, we deployed units to support U.S. efforts in the Gulf War. I remained stateside, but the mental health changes in some of the returning service members got my attention. These experiences and others convinced me to pursue psychiatry residency training after my initial active duty service. During my recall to active duty from 2004 to 2005, I was asked to write research grant proposals to the Office of Naval Research that focused on PTSD and virtual reality, a form of exposure therapy used to treat PTSD. I had a limited research track record in these areas at the time. But writing the proposals and working on the projects made me more focused on PTSD research.

It’s a team effort. We have to first listen to and understand the Veterans’ experiences and include the Veteran perspective in how we design strategies and choose outcomes. To borrow a phrase from the AIMS Center, which focuses on mental health solutions, none of us is as smart as all of us.

Being a Veteran definitely gives me an emotional tie to helping Veterans. I feel that we are all part of a family, and I want to be there for my family. I don’t think I have any special insight into Veterans’ needs, but I do have an emotional connection and the motivation to help them.

A research career is filled with rejection, which is not very motivating. So you have to choose an area of study you are passionate about. I asked one of my mentors how he chose problems to study. He said he chose problems that made him angry.  Connecting your research to a strong personal emotion will help keep you going.