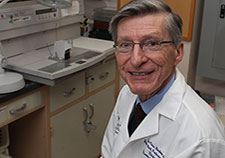 Dr. Jean-Pierre Raufman, a Veteran of the U.S. Public Health Service, is a gastroenterologist and researcher at the Baltimore VA Medical Center. (Photo by Mitch Mirkin)

Dr. Jean-Pierre Raufman, a Veteran of the U.S. Public Health Service, is a gastroenterologist and researcher at the Baltimore VA Medical Center. (Photo by Mitch Mirkin)

Dr. Jean-Pierre Raufman, a Veteran of the U.S. Public Health Service, is a gastroenterologist and researcher at the Baltimore VA Medical Center, with an eye on the development of colon cancer. He’s devoted more than four decades of his career to gastroenterology, which focuses on the digestive system and its disorders. At the University of Maryland School of Medicine, he’s the head of the division of gastroenterology and hepatology, the latter referring to diseases that affect the liver, gallbladder, biliary tree, and pancreas. He earned his medical degree from the Albert Einstein College of Medicine in New York City in 1975 and served in the U.S. Public Health Service from 1980 to 1983, reaching the rank of lieutenant commander.

As a naturalized American citizen, I’ve always been grateful for the privilege of living and working in the United States. Joining the Public Health Service provided me with an opportunity to serve my country and advance my biomedical research career. Throughout my career, I’ve felt an obligation to federal service. This has allowed me in a small way to pay back various government agencies for their support, primarily VA. I’ve had the privilege of serving on review panels of VA, the National Institutes of Health (NIH), and the Food and Drug Administration (FDA).

I’ve always been driven by curiosity: How does something work? I’m always awed by the complexity of any process once you start to dig deeper. It’s difficult to express the joy of true discovery – learning something that no one else knows.

I’ve been blessed with mentorship at every stage of my research career, from undergraduate to postdoctoral training. During my three years in the Public Health Service, I was mentored by two senior NIH scientists: Dr. Jerry Gardner and Dr. Robert Jensen. Each one had different approaches to clinical and basic research. I tried to adopt the best of both approaches.

I served for three years in the Public Health Service at the National Institutes of Health. Our clinical and basic research was focused on understanding the causes of severe conditions resulting in ulceration of the gastrointestinal tract. Among other advances, our research made many inroads into the management of patients with a dangerous form of gastrointestinal ulceration resulting from the Zollinger-Ellison Syndrome. That rare disorder occurs when one or more tumors form in the pancreas or small intestine. These tumors secrete large amounts of the hormone gastrin, which causes the stomach to produce too much acid.

My research explores the reasons behind the development of colon cancer and its ability to spread to other organs, mainly the liver. Colon cancer is one the most common cancers affecting Veterans, accounting for about 10 percent of cancers in former service members. Although endoscopic or surgical removal can cure initial cancers in the colon, the cancer becomes much harder to treat once it spreads to other organs like the liver. My work has focused on the role of signaling through a certain type of receptor, the muscarinic receptor, which is on the surface of colon cancer cells. Simulation of muscarinic receptors makes colon cancer cells grow and invade nearby tissues and the bloodstream, where they can travel to the liver. Once we understand how muscarinic receptor stimulation causes these effects, we’ll be able to develop targeted treatments to prevent the growth and spread of colon cancer.

Absolutely. My experience with the Public Health Service exposed me to the unmatched resources and mentoring offered by the VA Office of Research and Development and the National Institutes of Health. I’ve had the privilege of working for VA for more than 22 years as a clinician and research scientist.

I would derive great satisfaction from seeing the translation of one of our discoveries to clinical use. In fact, some of my early work in the Public Health Service led to such a discovery. While studying venom of the Gila monster, a lizard whose native habitat is in the southwestern United States, I discovered the venom contained several bioactive molecules. One of these, exendin-4, discovered in collaboration with Dr. John Eng at the Bronx VA, has become an FDA-approved treatment for diabetes.

Yes. Every day at the Baltimore VA, I see Veterans with gastrointestinal problems, including colon polyps and cancer. We do our best to prevent colon cancer with preventive screening that involves a colonoscopy and other approaches. Unfortunately, every few months we diagnose colon cancer in an unsuspecting Veteran. Relaying the “bad news” to the Veteran and accompanying family members is one of the most difficult and gut-wrenching parts of my job. Unquestionably, this spurs me to go back to the lab and work harder to find new treatment approaches.

As a research mentor and program director for an NIH-funded training grant, I think about this a lot. Of course, intelligence and experience are very important. But I believe the greatest key to success is perseverance or grit: The capacity to overcome adversity and just keep moving forward. As I think about it, there’s a clear military parallel with the notion of not giving up – “no surrender”.

I hope to keep doing more of the same for as long as I can. That means providing the best clinical care, performing groundbreaking research, and training the next generation of clinician-scientists.