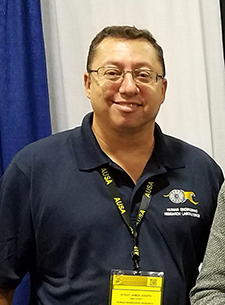 James Joseph, a Marine Veteran, is a research coordinator at the Human Engineering Research Laboratories, which researches, develops, and tests new technologies.

James Joseph, a Marine Veteran, is a research coordinator at the Human Engineering Research Laboratories, which researches, develops, and tests new technologies.

James Joseph, a Marine Veteran, is a research coordinator at the Human Engineering Research Laboratories (HERL). HERL, a VA facility that does research, development, and testing on an assortment of technologies, is a collaborative effort between the VA Pittsburgh Healthcare System and the University of Pittsburgh. His responsibilities include peer mentoring with Veterans, students, staff, and faculty, with a focus on physical and mental disabilities. He assists and supports disabled Veteran study participants and colleagues living with disabilities and acts as a facilitator to ensure inclusion for everyone at HERL. He’s also tasked with coordinating five research studies and is assigned to a collaboration with the International Society of Physical and Rehabilitation Medicine. He served in the Marines for more than two decades, earning a series of honors including the Meritorious Service Medal and the Navy and Marine Corps Achievement Medal.

My father and two of his nine brothers served during World War II. My mother’s brother served in the Navy during that time, and another of my father’s brothers served after the war. One of my older sisters, Diane, enlisted in the Army when I was a high school freshman. My family’s identity was predicated on knowing how many first-generation American relatives had served in the military. Seeing pictures of them in uniform made me want to serve. I was taught from an early age to love my country, our flag, and the American way of life, and to be thankful we live in a freedom-loving country. I knew by 10th grade I would be enlisting in the U.S. Marine Corps. I was not ready for college at 18, and I was determined not to be a financial burden on my parents.

Working for Dr. Rory Cooper, the director of HERL, opened my eyes to renewed service for a higher purpose. The largest minority in the world is people living with disabilities. Upon realizing the demand for innovative advances to improve the quality of life among all people with disabilities, including Veterans so near to my heart, I felt a natural pull to want to help HERL succeed in any small way.

My father’s situation is forever imprinted on me. He was diagnosed with diabetes when he was 51, and I was 10. He dealt with a succession of physical ailments, including multiple feet and leg amputations, stroke, loss of speech, and use of his right arm. The doctors of 1971 had little of today’s medical imaging, balloon angioplasty, and glucose monitoring technology. He was living at the Pittsburgh Aspinwall VA long-term care facility when he passed in 1986. Diabetes management is now part of my life, as well as PTSD and other results of military life. I spent my last seven years on active duty as a diabetic. Only my commanding officers and first sergeants were aware. Having a chance to assist any Veteran or person with disabilities is humbling knowing what my family experienced.

I am inspired by President John F. Kennedy, who said, “And so, my fellow Americans, ask not what your country can do for you—ask what you can do for your country.” That is a foundation I have believed in my whole life. The Marine Corps promotes leaders. I worked among many who by deed or even misdeed gave me insight toward building my personal toolbox of skills. Dr. Rory Cooper has allowed me to try to live up to JKF’s words through work projects that directly benefit Veterans. His encouragement, guidance, and ability to connect Veterans and people with disabilities with a better quality of life via technology, while encouraging inclusive academic involvement in research, is unrivaled. 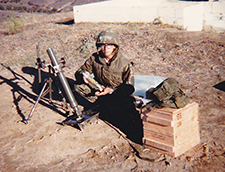 James Joseph in infantry training school at Camp Pendleton in California in 1979.

James Joseph in infantry training school at Camp Pendleton in California in 1979.

I enlisted at a military entrance processing station in Pittsburgh one day after my 18th birthday in 1979. A month later, I went to boot camp in California. Five months later as an infantryman, I was ordered to Camp Fuji in Japan and was assigned to be a sections leader. In my first tour of duty, I arrived two days after a fire at Camp Fuji killed 13 Marines and injured dozens of others. A powerful typhoon caused the fire, which burned many non-commissioned officers. Following Fuji, I was stationed at the Marine base in Quantico, Virginia, as an enlisted instructor to Marine officer basic school students.

In 1985, I reenlisted and changed my military occupation code to small missile system technician. This completely changed my career direction, as I was required to attend two very challenging and technical schools. This was my introduction to advanced electronics technology. I also served across the globe in the Philippines, South Korea, and Saudi Arabia, and I wound up in downtown Kuwait City during the Gulf War. My infantry experience had followed me. I was tasked as a breach guide during the war, along with my duties as an electro-optical repair shop chief.

I served seven years in California, almost six years in Japan, three years in New England, two years in Maryland, and about 18 months in Pittsburgh. I had 22 years of active service in support of reserve units across the country and spent my last 17 years as the electro-optical shop chief of every command where I was stationed. I’m so proud to have served my fellow citizens. Nothing was ever easy, nor was it expected to be. The Marines allowed me to grow beyond any childhood expectations of myself. The greatest reward of my military career was watching young people grow and succeed beyond their expectations.

I am a facilitator for the study “Voice of the Consumer,” a collaboration between HERL and the University of Pittsburgh. This is a consumer needs assessment survey that is used to guide future research related to assistive technology as desired by consumers. HERL has published The Voice of the Consumer: A Survey of Veterans and Other Users of Assistive Technology. In conjunction with that study is the provider study, which is designed to help us learn from clinicians and others who work to provide assistive technology. The study includes their opinions on whether technologies and issues they perceive as important are aligned directly with consumers' priorities for assistive technology devices. One of HERL’s goals is to propose direct needs-based research that is supported by consumer input.

I am also tasked to assist with an international study to identify barriers and facilitators of physical activity for people with disabilities around the world. A review of the study is being conducted to summarize current knowledge, to identify gaps in the literature, and to guide future research and guidelines. Lastly, HERL has many faculty and researchers conducting studies. Staff members are expected and encouraged to be a resource in the spirit of complete team efforts across all disciplines at HERL. Teamwork is a military hallmark Veterans model strongly in support of academia. 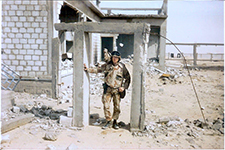 James Joseph near Kuwait City during the Persian Gulf War in 1991.

James Joseph near Kuwait City during the Persian Gulf War in 1991.

The Marine Corps expects Marines to move up or out. Taking this message to heart meant seeking to further my education after I retired from active service in 2001. I earned a bachelor’s degree in information technology in 2006 at Point Park University in Pittsburgh and a master’s degree in clinical rehabilitation and mental health counseling at the University of Pittsburgh in 2016. Both degrees are natural extensions of my military experiences. I am technically adept with an ability to assist in HERL’s fabrication prototyping machine shop. I speak directly with Veterans with or without disabilities at VA events, including the National Veterans Wheelchair Games and the National Disabled Veterans Winter Sports Clinic. My rehab counseling skills, Veteran credibility, and mentoring skills put Veterans at ease.

I am humbled by the opportunity to contribute to research that influences real-world quality of life advances. It’s a highly motivating experience watching my colleagues, many of whom have disabilities both visible or hidden, create, develop, improve, and ensure the safety of progressive assistive technology. HERL is closely supported by VA and Veterans themselves in our research process. Knowing my brothers and sisters in arms may benefit from our work is the ultimate reward.

Every bit of my attachment to my work is Veteran-centric. We have been well mentored by the faculty and staff of the Pittsburgh VA and the University of Pittsburgh to embrace all aspects of people with disabilities [PWD] as a part of our mission. The Marine Corps taught me early on that a unit’s effectiveness depends on leadership in knowing and fostering the personal strengths of Marines. People must be recognized as individuals with hopes, dreams, and their own personal aspirations. A PWD is not a person’s diagnosis, the type of chair they use, or what technology they need. Veterans instinctively know the power of working together to overcome obstacles.